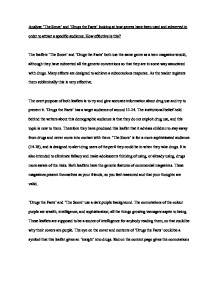 Analyse 'The Score' and 'Drugs the Facts' looking at how genres have been used and subverted in order to attract a specific audience. How effective is this?

Analyse 'The Score' and 'Drugs the Facts' looking at how genres have been used and subverted in order to attract a specific audience. How effective is this? The leaflets 'The Score' and 'Drugs the Facts' both use the same genre as a teen magazine would, although they have subverted all the generic conventions so that they are in some way associated with drugs. Many effects are designed to achieve a subconscious response. As the reader registers them subliminally this is very effective. The overt purpose of both leaflets is to try and give accurate information about drug use and try to prevent it. 'Drugs the Facts' has a target audience of around 11-14. The institutional belief held behind the writers about this demographic audience is that they do not exploit drug use, and this topic is new to them. Therefore they have produced this leaflet that it advises children to stay away from drugs and never come into contact with them. 'The Score' is for a more sophisticated audience (14-18), and is designed to alert drug users of the peril they could be in when they take drugs. It is also intended to eliminate fallacy and make adolescents thinking of using, or already using, drugs more aware of the risks. Both leaflets have the generic features of commercial magazines. ...read more.

'The Score' uses teenagers in the images so that the audience can feel more comfortable with what they are reading. The words that the company thinks will catch your eye are highlighted in bold such as 'depressant' and 'wise up'; when you read these words you become interested in the text they are used in. Also the institutional belief behind this leaflet's target audience is that they already take drugs therefore in these pages they have suggestions of help lines available in case anything becomes too serious to handle. At the bottom of the page they have all the drugs dealt with in the problems so that anybody relating to these problems can easily find out more. In 'Drugs the Facts' all of the answers given are in bold, and nothing is particularly focused on, this is because it is believed that this younger audience does not yet relate to drugs, and has not really come into contact with them yet, therefore they would not be interested in any particular words. The woman and the man in the photographs both look like they have a problem but are to scared to talk about it, they also look sad and depressed. ...read more.

Both 'The Score' and 'Drugs the facts' are effective as they both successfully attract their target audience. However I feel that 'Drugs the facts' is better at attracting and informing their target audience. The way that features have been used to attract their audience is very clever and in a way "devious" as the way each technique is conveyed was specifically designed to engage the reader. The way 'The Score' attracts its audience is by keeping it simple reflecting a mature life, which is to some extent, what teenagers want. However, they still lead a fun life, a main part of which is a driving social life. In this leaflet it is acknowledged that older teenagers already have an opinion along with experience of drugs. Consequently the facts are laid out for them and they are left to make their own final decision. This idea in theory is brilliant and has clearly been carefully planned. The institution realises their target audience are mature enough to make their own decisions and I feel the stereotypical teenager will take advantage of such trust. The stereotypical teenager is argumentative and experimental with their lives based around socializing so I don't think enough will make the 'right' promoted decision, leading a drugs free lifestyle. Because of this, in some cases this leaflet may not be very successful and effective the leaflet will be seen as "just yet another leaflet". ...read more.