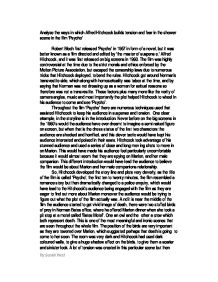 Analyse the ways in which Alfred Hitchcock builds tension and fear in the shower scene in the film 'Psycho'.

Analyse the ways in which Alfred Hitchcock builds tension and fear in the shower scene in the film 'Psycho' Robert Bloch first released 'Psycho' in 1957 in form of a novel, but it was better known as a film directed and edited by 'the master of suspense,' Alfred Hitchcock, and it was first released on big screens in 1960. The film was highly controversial at the time due to the strict morals and ethics enforced by the Motion Picture Association, but escaped the censorship laws due to numerous tricks that Hitchcock deployed, to bend the rules. Hitchcock got around Norman's transvestite side, which along with homosexuality was taboo at the time, and by saying that Norman was not dressing up as a woman for sexual reasons so therefore was not a transvestite. These factors plus many more like the verity of camera angles, music and most importantly the plot helped Hitchcock to wheel in his audience to come and see 'Psycho'. Throughout the film 'Psycho' there are numerous techniques used that assisted Hitchcock to keep his audience in suspense and tension. One clear example, in the storyline is in the introduction. Never before on the big screens in the 1960's would the audience have ever dreamt to imagine a semi naked figure on screen, but when that is the dress status of the first two characters the audience are shocked and horrified, and this clever tactic would have kept his audience interested and poised in their seats. ...read more.

As Marion took her clothes off, the camera takes a shot of Marion standing in black underwear, which in the 1960's gives a symbol of wanting to have sex. Ironically, in the beginning of the film she was wearing white underwear which is a symbol of purity and cleanliness. This office scene was soon to be followed by an extraordinary and famous 'shower scene', which took Hitchcock seventy-one to seventy-eight different camera set up's to film. Which suggested that Hitchcock wanted the scene to be perfect. The 'shower scene' took seven days to film and only lasted forty-five seconds. It opened with Marion taking off her robe for a shower. She was located in a white tile bathroom, which was brightly lit. All the natural sounds were emphasised; the toilet being flushed, soap packet being opened, movement of the shower and shower curtains. The audience could not predict a murder was about to happen because everything seemed superficially fine there are no real sign of foreboding. So when Marion took of her dressing gown and stepped into the bath, pulling the shower curtain across, normality was still sustained however the audience start to get a feeling of suspense and tension due to the lack of action. The camera angle at this scene is very important as the camera took a low angle shot and transferred to a high angle shot. ...read more.

The audience were shocked because they knew Marion's been attacked. They see the upper part of the body and her facial expressions. The high angled camera shot of Marion falling forward made Marion appear smaller which lead to her beginning to appear off the screen. This unique scene built up the tension in the audience, and image of her eyes filling the whole screen is frightening as the eye becomes lifeless and emotionless... The music and the sound effects in the film 'Psycho' also played and important role in creating tension in the audience. Hitchcock slowed down the tempo of the film, due to the fact it would have made the audience feel more shocked at the sudden death of Marion. The violin and cello in 'Psycho' was so effective because it is used as percussion suggesting the knife strokes. Deep sounds also sound percussive, and the audience could feel them literally piercing their body. This clever method would have sent shivers to the audience. In order for Hitchcock to create fear in the minds of the audience he had to use both the fast camera angle shots and the sharp, high pitch of the music to sustain and capture the audiences fear. This in the 1960 would have made the hairs on the back of the audience stand up, but now in the new millennium the audience are prepared and have seen more horrifying films, to be frightened from 'Psycho'. Consequently 'Psycho' led the path in film history, and it has made horror films what they are now. By Sonali Patel By Sonali Patel ...read more.