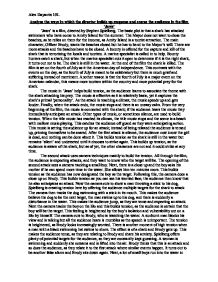 Analyse the ways in which the director builds up suspense and scares the audience in the film 'Jaws'.

Analyse the ways in which the director builds up suspense and scares the audience in the film 'Jaws' 'Jaws' is a film, directed by Stephen Spielberg. The basic plot is that a shark has attacked swimmers who have come to Amity Island for the summer. The Mayor does not want to close the beaches, as he relies on them for the income, as Amity Island is a tourist attraction. The main character, Officer Brody, wants the beaches closed but he has to bend to the Mayor's will. There are more attacks and the beaches have to be closed. A bounty is offered for the capture and kill of the shark that is terrorising the locals and tourists. A marine specialist is called in to help. Bounty hunters catch a shark, but when the marine specialist cuts it open to determine if it is the right shark, it turns out not to be. The shark is still in the water. At the end of the film the shark is killed. The film is set on the fourth of July as it the American day of independence. This contrasts with the events on the day, as the fourth of July is meant to be celebratory but there is much grief and suffering instead of merriment. Another reason is that the fourth of July is a major event on the American calendar, this means more tourism within the country and more potential prey for the shark. The music in 'Jaws' helps build tension, as the audience learns to associate the theme with the shark attacking his prey. ...read more.

Spielberg builds up a fear of the shark in the audience by allowing them to use their imagination for most of the film. The audience's imagination is much more effective as they imagine the worst. The director also uses music to build fear, as the music is associated with the shark from the very beginning and also associated with death and destruction since the first attack. This fear is built on by showing the damage the shark can do. This damage is shown during the post-mortem of the first victim. This victim has been left to the imagination, with only a description of the wounds, and finally a look at the mangled arm. The shark is also shown to be powerful and persistent. The shark pulls off a jetty, and then turns around to attack the man who was pulled off with the jetty. This shows both strength and perseverance. The shark also has its strength demonstrated during the post mortem when the marine specialist comments that the attack was not frenzied. This implies that the shark was just feeding normally, with a cold blooded killer instinct. This causes more fear in the audience as the shark is remorseless and can kill whom it wishes. It provokes fear as these events are not unfeasible and may cause the audience to fear swimming in the sea for a few weeks after watching the film. The terror is also built on by the characters reactions to the shark. Brody's reaction is to close the beaches but the Mayor will not have that and keeps the beaches open. ...read more.

I found the look of the shark quite disturbing, especially the cold, lifeless eyes that are visible. I think that the fear is enhanced by the fact that the shark is not out of the water and it is just rising up out of the depths. The layer of water that lay between the shark and the camera distorted its features. I found this scary as the water distorted and magnified its features. I also think that it is scary as only the head is shown, engulfing the lower torso of the man treading water. I also think that it is quite unnerving when the shark had finished with the man and went on its way, looking at the boy before swimming off. This scared me as I empathised with the boy. I imagined myself in his position and thought how terrified I would be if a huge shark swam past. I imagine that most people would go into shock if that happened to them. The tension in "Jaws" is mainly built up through the powerful soundtrack and the audience's imagination. The theme music is still well known, even though the film was made a while ago. Spielberg has done well by not showing the shark until late into the film, as it allows the audience to imagine the shark and this causes more fear. The film setting and plot is also geared well to cause fear and tension, as the events in the film are not entirely fictional. Shark attacks are an occurrence on beaches, albeit not very common. This film may have made watchers fear going into the water a few weeks after they watched it. Spielberg has achieved his objective of creating fear and tension in "Jaws". Alex Dayantis 10L ...read more.