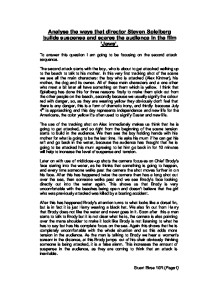 Analyse the ways that director Steven Spielberg builds suspense and scares the audience in the film 'Jaws'.

Analyse the ways that director Steven Spielberg builds suspense and scares the audience in the film 'Jaws'. To answer this question I am going to be focusing on the second attack sequence. The second attack starts with the boy, who is about to get attacked walking up to the beach to talk to his mother. In this very first tracking shot of the scene we see all the main characters: the boy who is attacked (Alex Kintner), his mother, the dog and its owner. All of these main characters and a one other who meet a bit later all have something on them which is yellow. I think that Spielberg has done this for three reasons firstly to make them stick out from the other people on the beach, secondly because we usually signify the colour red with danger, so, as they are wearing yellow they obviously don't feel that there is any danger, this is a form of dramatic irony, and thirdly because July 4th is approaching and this day represents independence and new life for the Americans, the color yellow it's often used to signify Easter and new life. ...read more.

After this has happened twice the camera then has a long shot out over the sea, then someone walks past and we see Brody's face looking directly out into the water again. This shows us that Brody is very uncomfortable with the beaches being open and doesn't believe that the girl who was previously attacked was killed by a boating accident. After this has happened Brody's attention turns to what looks like a dorsal fin, but is in fact it is just Harry wearing a black hat. We also fin out from Harry that Brody does not like the water and never goes in it. Soon after this a man starts to talk to Brody but it is not clear what he is, the camera is also pointing over the mans shoulder to make it look like Brody is not listening to what he has to say but has his complete focus on the sea. ...read more.

We then get a cut to above the water where we see a man realizing what has just happened, we then get a simultaneous track and zoom shot on Brody's face as realization kicks in. We then get a general panic as the blood starts squirting everywhere; at this point the tension in the audience has reached its summit. During the panic Brody still refuses to go into the water and jumps back at the slightest wave. After the panic of getting the children out of the water is over the music suddenly stops whilst Alex's mother cries out for Alex. At this stage the tension in the audience has died down completely but instead would be replaced with an emotional atmosphere as the audience realises what has happened. Throughout the whole film the background music dynamics generally represents the amount of tension and suspense present in the audience. For example during the whole of this scene music is present and there is a gradual crescendo as we get nearer to the attack, as does the amount of tension in the audience. ?? ?? ?? ?? Stuart Birse 10R (Page1) ...read more.