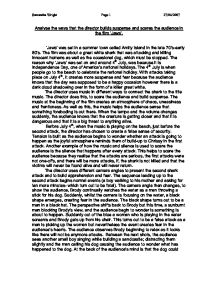 Analyse the ways that the director builds suspense and scares the audience in the film 'Jaws'. 'Jaws' was set in a summer town called Amity Island in the late 70's-early 80's. The film was about a great white shark that was attacking and killing innocent humans as well as the occasional dog, which must be stopped. The reason why 'Jaws' was set on and around 4th July, was because it is Independence Day, one of America's national holidays. The 4th July is when people go to the beach to celebrate the national holiday. With attacks taking place on July 4th, it creates more suspense and fear because the audience knows that the day was supposed to be a happy occasion however there is a dark cloud shadowing over in the form of a killer great white. The director uses music in different ways to connect the shark to the title music. The director does this, to scare the audience and build suspense. The music at the beginning of the film creates an atmosphere of chaos, uneasiness and franticness. As well as this, the music helps the audience sense that something foreboding is out there. When the tempo and the volume changes suddenly, the audience knows that the creature is getting closer and that it is dangerous and that it is a big threat to anything alive. Before July 4th, when the music is playing on the beach, just before the second attack, the director has chosen to create a false sense of security. Tension is built as the audience begins to wonder whether an attack is going to happen as the joyful atmosphere reminds them of build-up to Chrissy in the first attack. ...read more.

The scariest moment in the film was with the half-sunken boat and the head suddenly appearing. I think this was the scariest moment in the film because the director used eerie music to create a false sense of security, whilst Hooper was surveying the wrecked boat. Also the choice of using a close up on the dead man's head wit the scared expression and the suddenness of the appearance of the head. The director's decision of using dark colours during Hooper surveying the boat helped to create tension as it showed that the event was taking place at night. The final reason why I found this scene as the scariest was the use of the shots, which resembled a shark attack. This was because they constructed an atmosphere and tension, in which the audience had no clue whether there was going to be a shark attack or not. The director also chooses to show the audience the damage that the shark can do and to increase tension and suspense. The event that shows this well, is when there are two unknown characters chain some meat to an old tyre and throw it into the sea, creating suspense as the audience do not know whether 'Jaws' will take the bait. 'Jaws' takes the bait but shows the audience how much damage and destruction that he can produce. The tyre abruptly, turns back towards the shore compelling the audience to fear another victim is about to die. Fortunately, for the audience; who have been on the edge of their seats with anticipation, no one is killed but this permits the audience to fear that someone will die in the not-to-distant future. ...read more.

When the shark went for the cage, there is a tense and fearful atmosphere, as the audience could not tell if Hooper would manage to get away from the cage. The perspective of the camera changes back to the surface where the audience sees Brody trying vigorously to pull up the cage. Another way that tension is created in the ending is the V.L.Shots showing how far out the boat is and if something happened to them, no one would be able to help. Fear is also created when 'Jaws' attacks the boat with Brody and the fisherman on board. This is followed by tension as 'Jaws' starts eating the boat and the fisherman begins to slide in the direction of 'Jaws'. An atmosphere of fear takes over the audience, when the fisherman does finally slip into the jaws of ''Jaws''. This atmosphere continues for the duration of the film. Brody is left all alone to single-handedly 'fight' against the shark whilst the vessel is sinking. He throws an air canister in 'Jaws'' mouth. Brody attempts several times to shot the air canister but misses. Finally and fortunately with his last shot, the audience see the air container being shot and exploding causing 'Jaws' to explode as well, propelling millions of pieces of shark and human into the air. The last shot show Brody's desperation for killing the shark to help Amity go back to normal and enjoy what is left of the summer and they also increase the tension and anxiety for wanting the shark dead. Hooper unexpectedly appears and both remaining characters use a raft to swim back to the shore. Samantha Wright Page 1 27/04/2007 ...read more.