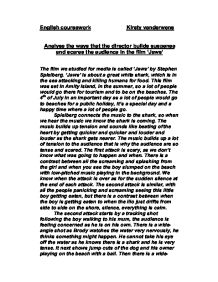 English coursework Kirsty vanderwens Analyse the ways that the director builds suspense and scares the audience in the film 'Jaws' The film we studied for media is called 'Jaws' by Stephen Spielberg. 'Jaws' is about a great white shark, which is in the sea attacking and killing humans for food. This film was set in Amity Island, in the summer, so a lot of people would go there for tourism and to be on the beaches. The 4th of July in an important day as a lot of people would go to beaches for a public holiday, it's a special day and a happy time where a lot of people go. Spielberg connects the music to the shark, so when we hear the music we know the shark is coming. The music builds up tension and sounds like beating of the heart by getting quicker and quicker and louder and louder as the shark gets nearer. The music builds up a lot of tension to the audience that is why the audience are so tense and scared. The first attack is scary, as we don't know what was going to happen and when. ...read more.

But as the shark was coming with the music a made a sharp bite from under the water going for the girls legs first. We don't know what it is, the audience was very tense wondering what is attacking the girl. But when the attack is over we knew that it was a shark as for the silence and contrast when the attack is over. The second attack is similar. A human swimming on their own with no one near them, kicking their legs, would attract the shark and the music will start and the camera would got to the attack in the sharks point of view. But when the second attack happened and just before it we know it's going to happen, Spielberg builds up allot of tension before the attack and when the attack is about to happen. On the 3rd attack on the fourth of July the public holiday when everyone comes to the beach, a man is eaten and Brody's son is attacked. Brody wouldn't let his son in the sea as he knew there was a shark still in there so Brody suggested to go in the pond so he did with his friends and they all were playing happily. ...read more.

Brody smiles as there is an extreme close up of his face. Then Matt Hooper who Brody thought was dead pops up form the sea he is alive and well. The two men smile to each other and starts laughing and then swim back to shore using a mid-angel shot to show the scenery around them and to know that the attack is over and Jaws is dead. Stephen Spielberg raises a lot of tension in 'Jaws' through the music to know that Jaws is coming and something bad is going to happen an attack or something. Also through the camera techniques, Spielberg uses low angle shots to show the legs of the next victim under the water this can also be used as from the shark's point of view so we know what Jaws is going to do. This film was a success and I enjoyed it very much and it built up a lot of tension to the audience. Most people knew when there was going to be an attack as for the music and tension. But overall I really liked this film, it was really good and I hadn't seen it before so it built more tension up as I didn't know what was going to happen so it was much scarier and so much more better than I expected it to be. ...read more.