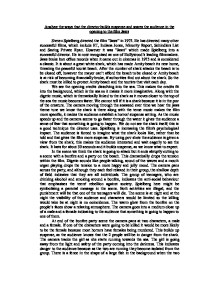 Analyse the ways that the director builds suspense and scares the audience in the opening to the film Jaws Steven Spielberg directed the film "Jaws" in 1975. He has directed many other successful films, which include ET, Indiana Jones, Minority Report, Schindlers List and Saving Private Ryan. However it was "Jaws" which made Spielberg into a successful director. He is now recognised as one of Hollywood's leading filmmakers. Jaws broke box office records when it came out in cinemas in 1975 and is considered a classic. It is about a great white shark, which has made Amity beach its new home, threating the peaceful tourist beach. After the number of shark attacks the beach is to be closed off, however the mayor can't afford the beach to be closed or Amity beach is at risk of becoming financially broke, if authorities find out about the shark. So the shark must be killed to protect Amity beach and the tourists that visit each day. We see the opening credits dissolving into the sea. This makes the credits fit into the background, which is the sea so it makes it more imaginative. Along with the digetic music, which is thematically linked to the shark as it moves closer to the top of the sea the music becomes faster. ...read more.

It symbolises the girl is running away from the shark. She is running with joy away from the boy but when she is swimming she will be trying to swim away from fear and death. We can no longer hear the sound of the beach party which emphasises just how isolated the teenagers are. The scene cuts to the girl diving into the sea. The girl jumps into the sea and all you can hear is her swimming in the water. The sea is supposed to be a relaxing sound but we know of the predator that lurks in its depths and we fear for the girl's life. Having the scene set at night also adds tension and suspense because in the dark it is more frightening for most people as you cannot see well. The camera pulls back to show a wide shot of the sea. This shows how open the sea is and tells how much the girl is isolated in the water. The ELS makes her look small and inferior, which gives the scene suspense, as there is a violent creatures underneath her and the silence, which indicates to the audience that the attack is soon. The audience is anticipating the attack. We know that she will be killed because no one is around to save her. ...read more.

The safe feeling disappears when the girl and boy run away from the bonfire party. Although the light can provide safety, it can also resemble the visualisation of hell, which the girl went through in her attack. The director has a moral in that attack which is make sure you are aware of what is around you and observe your surroundings before making your move. The humorous tone is then replaced by an atmosphere of heavy menace by the shark. When the girl swims out to sea she is not aware that the boy has passed out, so she is alone in an unknown territory, where anything can exist under the water. The shark seems to rip her apart but the details are not shown because the director is building the scenes up to the main attack. We can only see her been thrown round like a baby playing with a toy. The camera shoots above the water when we want it to shoot under the water so the director has done that to build tension. I think that the scenes leading up to the attack and the attack itself are full of suspense mainly thanks to excellent camera shots, great symbolisation and the brilliant storyline which have made the audience feeling scared yet eager to see what would happen to the shark and the residents of Amity beach. ?? ?? ?? ?? ...read more.