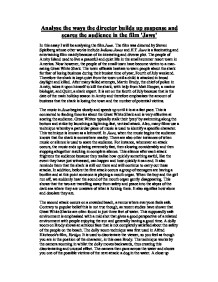 Analyse the ways the director builds up suspense and scares the audience in the film 'Jaws' In this essay I will be analysing the film Jaws. The film was directed by Steven Spielberg whose other works include Indiana Jones and E.T. Jaws is a fascinating and entertaining film mainly because of its interesting and diverse plot. The people of Amity Island used to live a peaceful and quiet life in the small summer resort town in America. Now however, the people of the small town have become victim to a man-eating Great White Shark. The town officials hesitate to warn people about the shark for fear of losing business during their busiest time of year, Fourth of July weekend. Therefore the shark is kept quiet from the town until a child is attacked in broad daylight and killed. After many failed attempts, Martin Brody, the chief of police in Amity, takes it upon himself to kill the shark, with help from Matt Hooper, a marine biologist, and Quint, a shark expert. It is set on the fourth of July because that is the date of the main holiday season in Amity and therefore emphasises the amount of business that the shark is losing the town and the number of potential victims. ...read more.

The camera then shows the legs of the child from below, and as the audience knows, this angle is from the eyes of the shark. From the opening credits the director successfully builds up the audience's fear of the shark by using a number of techniques. Initially, in the first attack, there is the fear of the unknown with the audience asking themselves; "What is in the water? And who is the attacker?" However, the audience does know that the film is about a man-eating shark and they are aware of the inevitable danger that will be included in this film. In the first attack, Spielberg deliberately does not show the shark so that the audience is able to use their imaginations to construct a picture of what the attacker looks like. The mind is more instrumental in scaring oneself in horror films than, for instance gore. Tension is continued in the film with the 'killer' music factor. It is fast paced and is played in a low and quiet tone, which is similar to techniques used in other films. In the second attack the director builds up fear for the characters by making the dorsal fin clearly visible to all. ...read more.

Whereas the two previous attacks had occurred in busy areas, this time the audience realises that they will be travelling out alone to catch the shark in a small boat. They are fearful because they realise that the shark will kill without mercy. When the team eventually see the size of the shark they realise how unprepared they are and they are afraid because they believe the shark is able to kill them as they underestimated the size of it: "We're going to need a bigger boat!" The suspense now truly begins because they and the audience knows that the shark is out to hunt them. . Spielberg purposely made sure that the boat was small to create all of the fear, tension and suspense described above. Right until the end the tension is maintained by Brody shooting the shark at the very last moment and blowing it up so that the audience remains on the edge of their seats throughout. The film Jaws was made at a time when special effects and computer imaging were almost non-existent. Spielberg though, still manages to scare the audience using incredible and inventive techniques which have made him world renowned and respected. Many regard Jaws as one of the greatest films ever made and regard Spielberg as one of the greatest ever directors, and in evaluating it I can understand why. ...read more.