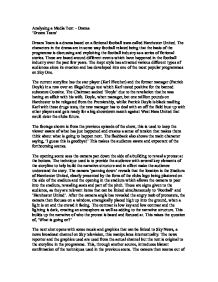 Analysing a Media Text - Drama 'Dream Team' Dream Team is a drama based on a fictional football team called Harchester United. The characters in the drama are in some way football related being that the basis of the programme is discussing and exploiting the football industry as a series of fictional stories. These are based around different events which have happened in the football industry over the past few years. The inept style has attracted various different types of audiences since its creation and has developed into one of the most popular programmes on Sky One. The current storyline has the star player (Karl Fletcher) and the former manager (Patrick Doyle) in a row over an illegal drugs test which Karl tested positive for the banned substance Cocaine. The Chairman sacked 'Doyle' due to the revelation that he was having an affair with his wife. Doyle, when manager, bet one million pounds on Harchester to be relegated from the Premiership, whilst Patrick Doyle is black mailing Karl with these drugs tests, the new manager has to deal with an off the field bust up with other players and gets ready for a big showdown match against West Ham United that could deter the clubs future. ...read more.

Then there is shown the title of the programme. The sequence is shown in the form of quick, short and sharp, edited footage to fit the tempo of the music being played. There is a small border around the picture and the footage is shown as almost translucent. The colour scheme is purple, this colour is specifically used to link to the colour of the clubs kit. The use of key features that relate to a specific location or place is imminent in the footage, as the 'slow motion' effects add a sense of anxiety throughout. The ambulance and paramedics have initiated where the patient is heading towards. The slow motion is used to good effect as the footage is edited into a collage from various different angles. The music used adds to the atmosphere and fits with the tempo of the footage. The music is from the opera genre and could be deemed as religious. Due to the actions in the previous scene the patience could be dead, so the music plays on this expectation. The next scene is continuing the same theme. The camera angle is high up and is looking down; this in its self gives the impression that the subject is venerable and weak. ...read more.

The stadium can be recognised by most fans as Stamford Bridge, the home of Chelsea Football Club. All of the special effects, primary and secondary source footage are edited together to produce a feature presentation of the games. Along with the commentary and analysis this is used to good effect. The end of the programme is finalised by taking a look of short, sharp, edited footage of the next episode in the series. The best parts and the most ironic scenes are picked out to forward to the audience so that they want to see more and watch the show next time. This is done so that the viewing figures for the next episode either increase of stay at a similar level, a massive reduction could lead to the programme being axed by the channel. The irony in story lines in summed up by body language, camera angle, length of shot and the way the text is presented. The target audience for the programme is people in the age bracket of 15 to 30. This is due to the ironic and sometimes predictable storylines and the age of the characters in it. The main target area is the people who watch football and understand the football industry. ...read more.