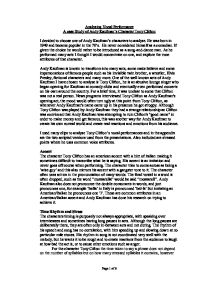 Analysing Vocal Performance A case Study of Andy Kaufman's Character Tony Clifton I decided to choose one of Andy Kaufman's characters to analyse. He was born in 1949 and became popular in the 70's. He never considered himself as a comedian. If given the choice he would rather to be introduced as a song-and-dance man. As he performed many acts I thought I would concentrate on one, and explore the voce attributes of that character. Andy Kaufman is known to transform into many acts, some make believe and some impersonations of famous people such as his invisible twin brother, a wrestler, Elvis Presley, fictional characters and many more. One of the well known acts of Andy Kaufman I have chosen to analyse is Tony Clifton, he is an abusive lounge singer who began opening for Kaufman at comedy clubs and eventually even performed concerts on his own around the country. For a brief time, it was unclear to some that Clifton was not a real person. News programs interviewed Tony Clifton as Andy Kaufman's opening act, the mood would often turn ugly at this point from Tony Clifton, as whenever Andy Kaufman's name came up in his presence he got stroppy. Although Tony Clifton was played by Andy Kaufman they had a strange relationship as Clifton was convinced that Andy Kaufman was attempting to ruin Clifton's "good name" in order to ...read more.

'Woah somebody's is wearing a lot of perfume round here must be that time of the month - huh?' (Andy Kaufman, Yeah, Yeah, Yeah) On both lines the pitch rises towards the end and the bold words are where he shouts the words. He uses this as it makes the joke clearer and the punch lines are towards the end which they are then neatly structured to make it obvious which is the part to listen to. When singing uses both Dipping Intonation where his voice falls and then rises and Peaking Intonation where his voice rises and then falls. Which he uses strongly in the beginning of song 'I will survive'. This is shown in the lines below, with the rising pitch in blue and the falling pitch in red: 'First I was afraid I was petrified Kept thinkin I could never live Without you by my side' (Andy Kaufman, I Will Survive) He uses intonation to keep the song entertaining as if it was just one pitch used throughout the song it would make it sound drowning and boring. Voice Quality The quality of his voice is not the best, which is what Andy Kaufman is trying to achieve as he wants it to be amusing not an every day voice the audience would come across. ...read more.

His character often asks the crowd questions but does not wait to listen for there answers and does not often respond to them as shown in the transcription, when he does coraspont to the audiences answers it could be questioned if some members of the crowd are in on the act. Andy Kaufman is trying to create this fictional character influenced by gangsters and wise guys but still having a uniqueness. He achieves this by playing around with creative language to create this character, some of these attributes include; impersonations of other characters, repeated sentances and words giving the act a more real and genuine effect. Contributing to this point are his stuttuers, thinking pauses and umm's throughout his acts this can be seen using the 'Key' and transcription in appendix One and Two. He uses jokes and brings the audiences into them by using them as his punch lines by also used marked vocabulary which is often inappropriate and and unexpected, this is shown below: 'I think you sat in some cottage cheese Oh pardon me, that's your ass' (Andy Kaufman, Yeah, Yeah, Yeah) As shown his jokes also use such attributes as sarcasm and mockery. Andy is well known for playing many characters and many people to this day are unsure who the real kaufman was. ...read more.