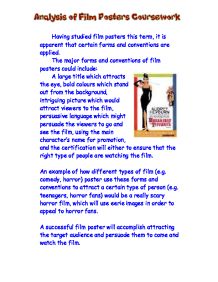 Having studied film posters this term, it is apparent that certain forms and conventions are applied. The major forms and conventions of film posters could include: A large title which attracts the eye, bold colours which stand out from the background, intriguing picture which would attract viewers to the film, persuasive language which might persuade the viewers to go and see the film, using the main character's name for promotion, and the certification will either to ensure that the right type of people are watching the film. An example of how different types of film (e.g. comedy, horror) poster use these forms and conventions to attract a certain type of person (e.g. teenagers, horror fans) would be a really scary horror film, which will use eerie images in order to appeal to horror fans. A successful film poster will accomplish attracting the target audience and persuade them to come and watch the film. By SCOTT STONEHAM Q.4i What words appear most noticeably on the poster and what makes them so noticeable? The language used on a film poster is also very important. The words, which stand out most of the film poster "Breakfast at Tiffany's", would be "Audrey Hepburn." Audrey Hepburn was a world famous actress, this would be used as the largest text on the poster because she is really famous, it would make people want to go and see it because it is starring their favourite actress, so they can see how she acts it, and see how luxurious her life is. ...read more.

It might also indicate that they could be possible drug dealers or involved in crime. This would attract to this target audience because it is very simple looking and would make them curious to know what the film is all about. It will also appeal to their danger-loving side. Q.6ii What institution made the film? The institution of this film would be Miramax. They would attract the target audience by using star-power and gangster strap lines, which would encourage the viewers to watch it. Q.7i What words appear most noticeably on the poster and what makes them so noticeable? The most noticeable words which appear on the poster would be the title "reservoir dogs" This title stands out the most because of its large size and bold colours. The colour red could represent the colour of blood. These words being so noticeable would affect the target audience because it causes simplicity for the person looking at the poster and makes them remember the title. "5 total strangers, team up for the perfect crime. They don't know each other's names. But they have each others number." This strap line for the film is very catchy, as it brings a certainty of mystery as it makes you wonder; what will they be trying to achieve, and how come they are not allowed to know each other's names. ...read more.

The type of language I used was emotive, the slogan "viewer beware, your in for a scare" would work well because if they see that it is a horror film, they will go and watch it, and they will easily know it is a horror film by the vicious green outline glow. The only font I have used on the poster is from a website, which so happens to be called horror. The only colours I have used are green and black, which is affective as it makes the writing really stand out. Overall in making my poster, I am very pleased with my achievements. Being particularly pleased in the way I made the image and writing stand out from the background. I am delighted with every aspect of it, and not having any regrets about my theme idea etc. Generally speaking, I think it will attract my chosen target audience because looking at other horror movies, I feel as if I have accomplished everything that they have achieved. What I learnt about the role film posters play in the success of a film is that they can either attract or discourage the chosen target audience, they are also a great way to advertise. Based on my poster, I think that my film would do really well, as u can imagine the frightful things the murderer would do. I feel it would really appeal to the chosen age-group as it comes across as a really scary movie. ...read more.