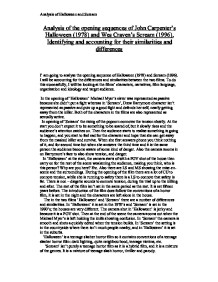 Analysis of the opening sequences of John Carpenter's Halloween (1978) and Wes Craven's Scream (1996), Identifying and account

Analysis of the opening sequences of John Carpenter's Halloween (1978) and Wes Craven's Scream (1996), Identifying and accounting for their similarities and differences I' am going to analyse the opening sequence of Halloween (1978) and Scream (1996). I will be accounting for the differences and similarities between the two films. To do this successfully, I will be looking at the films' characters, narratives, film language, organization and ideology and target audience. In the opening of 'Halloween' Michael Myer's sister was represented as passive because she didn't put a fight whereas in 'Scream', Drew Barrymore character isn't represented as passive and puts up a good fight and defends her self, nearly getting away from the killer. Both of the characters in the films are also represented as sexually active. In opening of 'Scream' the rising of the popcorn connotes the tension slowly. ...read more.

Also there are LS and MS showing the mise-en-scene and the surroundings. During the opening of the film there are a lot of CU to connote tension, while she is running to safety there is a LS to connote that safety is far. There is non - diegetic sounds to connote tension, during the trial up to the killing and after. The rest of the film isn't set in the same period as the rest. It is set fifteen years before. The introduction of the film does follow the conventions of a horror film, it is set in the night and the characters are left alone in the house. The in the two films 'Halloween' and 'Scream' there are a number of differences and similarities. In 'Halloween' it is set in the 1970's and 'Scream' is set in the 1990's; the houses are very different. ...read more.

The Target audience is set between 18-24, late teens and young adults. It is more unlikely suitable for young teenagers because it has swearing and visual effects that are quite horrifying. The cast of the actors in both films are in their late teens and young adults. The Director of 'Halloween' wasn't really well known, and had only made a one film before making this one, until he made this spectacular film, on such a low budget and most of it went to the one semi-famous actor, which was John Pleasance. It got its publicity from word of mouth, by teenagers. On the other hand 'Scream' was predicted to be a hit, and was. The director was well known from making the horror film 'Nightmare On Elm Street', and 'Scream' had well known actors such as: Neve Campbell and Drew Barrymore. It had a big budget and was spent on the film and the publicity, and made millions. ?? ?? ?? ?? Analysis of Halloween and Scream ...read more.