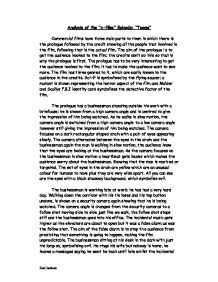 Analysis of the "x-files" Episode: "Tooms" Commercial films have three main parts to them in which there is the prologue followed by the credit showing all the people that involved in the film, following that is the actual film. The aim of the prologue is to get the audience hooked to the film; the credits don't do this so that is why the prologue is first. The prologue has to be very interesting to get the audience hooked to the film; it has to make the audience want to see more. The film has three genres to it, which are easily known to the audience in the credits. Sci-fi is symbolised by the flying saucer; a mutant is shown representing the horror aspect of the film and Mulder and Scullys F.B.I identity card symbolises the detective factor of the film. The prologue has a businessman standing outside his work with a briefcase; he is shown from a high camera angle and is centred to give the impression of him being watched. As he walks in slow motion, the camera angle is switched from a high camera angle to a low camera angle however still giving the impression of him being watched. ...read more.

Eugene is asked lots of questions about him and the murders. Mulder asked him two more questions about murders in the past when he wasn't alive. Eugene past the lie detector test, but the questions that Mulder asked stood out a long way, he lied a lot on them two questions. Mulder was certain that he was the killer of the victims who had their livers removed. After Tom Colton let Eugene go because he wasn't sure it was him, Mulder argued with him saying that he is doing the wrong thing. Tom Colton only wanted what was best for him. Tom was trying to get Scully to work for him. Mulder was sitting down on a chair at one side of the table, Tom and Scully were standing up at the other side of the table together symbolising the Mulder was over powered. Tom insulted Mulder Several times and said to Scully that Mulder was her problem and she should work with him. Mulder was very upset, he was crushed by it. The body language of Mulder said it all; He was slouched in his seat almost as if he was hiding like a child with his hang dog expressions. ...read more.

The camera focuses on the tiny ventilation grill, which is white symbolising goodness; this is also a false alarm as Tooms jumps out of the vent, which is representing goodness. The vent is to small for Tooms to jump out of so they fooled the audience by making the items in the background, around the vent and the actual vent bigger so Tooms could jump through and grab Scully. Tooms knocks the gun out of the hand of Scully, he throws her on the floor revealing lots of Scully's flesh which men want to see, but on the overhand women find it offensive making it a sexist scene. Mulder comes running in the door and jumps on Tooms, he hits Mulder leaving him lying on the floor. Tooms smashes the window and tries to escape before Scully handcuffs him to the bath. Tooms is locked up in prison with a newspaper, he starts putting it in his mouth making is wet and throwing it in the corner attempting to make a new nest ready for hibernation. One of the security guards brings him some food passing it through the rectangular shaped flap, he pauses, stares at it and knows he can get through, the camera zooms in on the flap and the film ends leaving the audience not knowing what is going to happen. Karl Jackson ...read more.