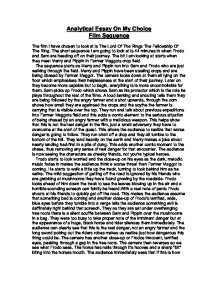 Analytical Essay On My ChoiceFilm Sequence The film I have chosen to look at is The Lord Of The Rings The Fellowship Of The Ring. The short sequence

Analytical Essay On My Choice Film Sequence The film I have chosen to look at is The Lord Of The Rings The Fellowship Of The Ring. The short sequence I am going to look at is 44 minutes in when Frodo and Sam are heading off on their journey. The bit I am looking at starts when they meet Merry and Pippin in Farmer Maggots crop field. The sequence starts as Merry and Pippin run into Sam and Frodo who are just walking through the field. Merry and Pippin have been stealing crops and are being chased by Farmer Maggot. The camera looks down at them all lying on the floor which emphasises their helplessness at the start of their journey. Later on they become more capable but to begin, everything is is more uncontrollable for them. Sam picks up Frodo which shows Sam as his protector which is the role he plays throughout the rest of the films. ...read more.

This makes the audience assume that something bad is coming and another close-up of Frodo's terrified, wide, blue eyes before they tumble into a verge tells the audience something evil is deffinately right behind that screech. They as they are sat under overhanging tree roots there is a silent scuffle between Sam and Pippin over the mushrooms in a bag. They were too busy to take proper note of the imminent danger but at the appearence of a huge, black horse and rider silences them immediately. The audience can clearly see that this is the real danger, not an angry farmer and the long sword poking out the riders robes makes us realize just how dangerous this thing could be. The camera has another close-up or Frodos innocent, terrified eyes, peeking through a gap in the tree roots. The camera then reverses so we see what Frodo sees. The horse has nails through it's hooves and a sharp "bit" biting into the horses mouth. ...read more.

Sam grabs Frodo who comes to his senses and the music stops straight away. The audience now associates this skin-creeping music to the rider and the ring. The power of the ring almost overcame Frodo at the start of his journey so Sam, his protector, has already saved him from being drawn into its darkness. For us watching the film we can see that Sam is going to be Frodos bodyguard-like character to stop him being drawn in and Frodo is terrified and needs his friends help. Pippin throws his beloved mushrooms away to ditract the hooded rider and when he leaves they run. This shows the audience how his friends sacrafice to help him and keep him safe. Frodo stares at the ring in his hand and the scared look in his eyes lets the audience know the rings power over him. This sequence introduces thae characters, and their roles on the quest. It also creates the right emotions among the audience and introduces sound links between the ring, the rider, Frodo and his friends. ...read more.