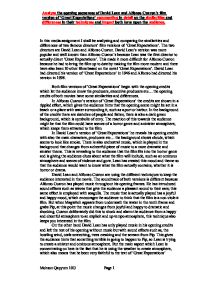 Analyze the opening sequences of David Lean and Alfonso Cuaron's film version of 'Great Expectations' commenting in detail on the similarities and differences in their techniques and impact both have upon the audience.

This technique in which Lean has used here is effective because it builds up tension as the frames go by which suggests to the audience that there is something bad going to happen to Pip. Both film versions use many different camera shots, which involve the audience emotionally, and also create a visual image in their mind towards the particular scene. Alfonso Cuaron first uses Extreme Long Shot (ELS), which is also known as the establishing shot. This lets the audience know what the scene is bound to contain and also sets the opening frame or scene. There is also one particular frame when there is an Extreme Close Up (ECU) on the boy's face, which signifies to the audience that there is some faithfulness to the text because David Lean also uses this technique and he is faithful to the text. The impact of this is that the audience is involved in the film because the ECU provides a Point Of View (POV) angle expression on the boys face. David Lean also uses similar camera angles but involves the audience in a different way. The main focus point of David Leans POV angle is when Pip is looking up at the creaking tree, which looks like a person or a person, stood behind the tree. ...read more.

But David Lean uses many different sounds such as the hauling, creaking tree, and owl shrieking and whistling. This creates an up-tempo atmosphere, which also builds up tension. The technique of both versions is good because the music of Cuaron's film calms the audience but Lean's film builds up an up-tempo atmosphere and tension. Finally the dislodge in my eyes is different and similar because they have the same effect on both boys in the films but Alfonso Cuaron's is much more aggressive because the modern audience like aggression and violence. There is also a great deal of bad language in his film. Lean's version is also slightly aggressive but nowhere as near as much, and there was no strong language in the dialogue because the audience in them day's were much more civilized and strict. In my opinion I think that I would still prefer to watch Alfonso Cuaron's version because as a modern audience I am used to the aggression and violence of modern films and novels. The language in the original film versions is more true to the novel, but is therefore more difficult to understand, as it is old-fashioned. ?? ?? ?? ?? Mohson Qayyum 10G Page 1 ...read more.