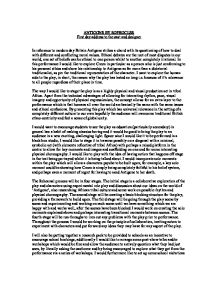 ANTIGONE BY SOPHOCLES First day address to the cast and designer In reference to modern day Britain Antigone strikes a chord with its questioning of how to deal with different and conflicting moral values. Ethical debates are the root of most disputes in our world; one set of beliefs can be ethical to one person whilst to another completely irrational. In this performance I would like to explore Creon in particular as a person who is just conforming to his personal ethics and show his relationship to Antigone as far more than a dictatorial traditionalist, as per the traditional representation of the character. I want to explore the human side to the play, in short, the reason why the play has lasted so long i.e. because of it's relevance to all people regardless of their place in time. The way I would like to stage the play is as a highly physical and visual production set in tribal Africa. ...read more.

with perhaps a raised platform in the centre to allow for key moments and images and scaffolding on one end for some interesting physical choreography. I would like to play with the idea of having action that happens off stage in the text being portrayed whilst it is being talked about. I would incorporate solo moments within the play which will allow a characters psyche to be built upon; for example, a key solo moment could be showing how Creon is simply being completely faithful to his belief system, and perhaps even a moment of regret for having to send Antigone to her death. The Rehearsal process will be in four stages. The initial stage is a collaborative exploration of the play and characters using experimental role play and discussion about our ideas on the world of 'Antigone', also researching African tribal culture and some work on possible rhythm and physical choreography. ...read more.

I would furthermore like to set up some school visitations with the cast and create workshops centred around the piece to conduct with the pupils, as well as additional publicity, I believe this aspect of the rehearsal/continuation process will be useful to the actors as a constant reminder of who we want this play to reach, on what level, and the vast majority of interpretations the performance could inspire. I emphasise that my goal for this production is to move away from traditional interpretations of Greek plays and experiment with new ways of delivering the human content of the piece as opposed to getting stuck in the rut of preserving antiquity. I will be striving to present it in a very accessible, exciting way in order to bring it to life for a contemporary audience as more than a classic which should be seen, and instead as a dynamic, relevant piece of theatre for modern society. ...read more.