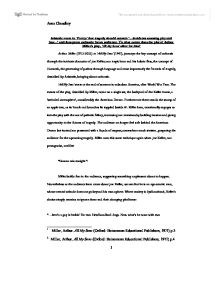 Aristotle wrote in Poetics that tragedy should contain incidents arousing pity and fear and thus prove cathartic for an audience. To what extent does the plot of Arthur Millers play, All My Sons

Aristotle wrote in 'Poetics' that tragedy should contain '...incidents arousing pity and fear...' and thus prove cathartic for an audience. To what extent does the plot of Arthur Miller's play, 'All My Sons' allow for this? Arthur Miller (1915-2005) in 'All My Sons' (1947), journeys the key concept of catharsis through the intricate character of Joe Keller; our tragic hero and his hubris flaw, the concept of Hamartia, the generating of pathos through language and most importantly the formula of tragedy, described by Aristotle, bringing about catharsis. 'All My Sons' starts at the end of summer in suburban America, after World War Two. The events of the play, described by Miller, occur on a single set, the backyard of the Keller home, a 'secluded atmosphere', considerably the American Dream. Furthermore there stands the stump of an apple tree, as its 'trunk and branches lie toppled beside it'1. Miller here, emotionally engages us into the play with the use of pathetic fallacy, increasing our emotions by building tension and giving opportunity to the futures of tragedy. The audience no longer feel safe behind the American Dream but instead are presented with a fa�ade of respect, somewhere much sinister , preparing the audience for the upcoming tragedy. Miller uses this same technique again when Joe Keller, our protagonist, notifies: "Gonna rain tonight."2 Miller builds fear in the audience, suggesting something unpleasant about to happen. Nevertheless as the audience learn more about Joe Keller, we see that he is an ego-centric man, whose mental attitude does not go beyond his own sphere. ...read more.

Miller has made this is evident through the stage directions, exemplifying the fear: "(frightened, but angry): Yes, I'm sure."8 The fear left with the audience to experience at the end of Act One becomes pivotal in the role of experiencing catharsis. Miller has instantaneously given us the opportunity to empathise with the characters and in turn fear for them thus we are given a sense of foreboding, vital for ultimately experiencing catharsis in any tragedy. In the opening stage directions of Act Two Miller, again, uses pathetic fallacy to suggest the progression in the plot and perhaps the catastrophe still to come suggested metaphorically by Miller: "...leaving stump standing alone..."9 Though as the play progresses a growing sense of anxiety is created in the audience by Miller. We can see this through Sue Bayliss a character chosen by Miller to represent the wider community. This lets the audience fear even more for Joe Keller as a character because it becomes apparent that not everybody overlooks his guilt: "There's not a person on the block who doesn't know the truth."10 In Act Two Miller finally decides to present a rush of emotions which soon psychologically engage the audience as well as the characters Chris, Ann and George. Miller's use of short, forceful sentences build tension and anxiety in the audience that we soon become eager to reach some sort of resolution, where inner peace can be found. ...read more.

What does the letter enclose and how can this change the lives of all the characters, is what we the audience fear for. After the truth has been exposed we finally feel a sense of relief, but then the plot takes a sudden turn: "A shot is heard in the house. They stand frozen for a brief second."19 In conclusion: having explored the issues within the plot that allow for catharsis, Arthur Miller in 'All My Sons' does not let the audience reach the long awaited cathartic ending. Our hope for resolution and the purging of valuable emotions is waived through the ultimate act of cowardice by Joe Keller: his suicide. The hope we have for Chris, Ann and Kate to live freer lives is now the only hope that exists. Instead of relief, a whole new consortium of anxieties is revealed. We can evaluate upon the fact of whether or not all the characters had a further responsibility. Should have Chris vowed to prove that his fathers alibi was the truth? At the time when Steve Deever called Keller for help and Kate answered, should she have taken responsibility? And finally, should we, as the audience, be so harsh upon Kate Keller, is her only fault to love her family more than ever, thus pitying her state. Miller has indeed purged our emotions till the very end of the play, but whether or not we have reached a cathartic ending can only be identified from one's own experience. ...read more.