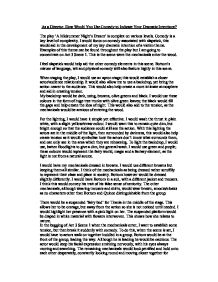 As a Director, How Would You Use Comedy to Indicate Your Dramatic Intentions?

As a Director, How Would You Use Comedy to Indicate Your Dramatic Intentions? The play 'A Midsummer Night's Dream' is complex on various levels. Comedy is a key level of complexity. I would focus on comedy associated with slapstick, this would aid in the development of my key dramatic intention of a victim theme. Examples of this theme can be found throughout the play but I am going to concentrate on Act 3 Scene 1. This is the scene were the mechanicals enter the wood. I feel slapstick would help aid the other comedy elements in this scene. Bottom's misuse of language, wit and physical comedy will also feature highly in this scene. When staging the play, I would use an apron stage; this would establish a closer actor/audience relationship. It would also allow me to use a backdrop, yet bring the action nearer to the audience. This would also help create a more intimate atmosphere and aid in creating tension. My backdrop would be dark, using, browns, olive greens and black. I would use these colours in the form of huge tree trunks with olive green leaves; the black would fill the gaps and help create the idea of night. This would also add to the tension, as the mechanicals would be anxious of entering the wood. ...read more.

Bottom would be at the front of the group, leading the way. Although he is leading he would be cautious. The actor would keep his facial expression smirking nervously, with his eyes always moving and searching. The remaining mechanicals would look petrified and hold onto each other desperately, constantly looking round and moving closer together for reassurance. To help with the tension, I would add sound effects of twigs snapping when stepped on, and animal noises such as an owl. When the characters hear these sounds, they would look round with complete terror on their face and move on, slightly quicker then before. As the actors reach the thrust, they would form a rough line, and then push Bottom forward, then running forward to him when realising they have no one at the front. All the characters' speech would be delivered rather nervously, but Bottom although nervous, would speak in an authoritive tone. When discussing the killing scene and the lion scene, the characters would be taking it very seriously, not considering the fact that they lack the experience or talent to fool the audience. Although this would not get an audible response from the audience i.e. a laugh, this would be designed to entertain the audience because of the characters' na�vet�. ...read more.

This shows the audience that there's a change in atmosphere and prepares them for something to happen. When Bottom nervously sings the bed would lower. There is irony in Titania's line 'What angel wakes me from my flowery bed?' The audience know Titania has the juice on her eyes and that to her she is being serious. I would again use the word play in Bottom's song '...and dares not answer nay' on nay the character would whiney like a donkey. This is wit and should make the audience to laugh, as it is visual also. In conclusion, I am using comedy to amuse and entertain the audience, but also it helps with the theme of victims when using slapstick. I find that when comedy if I use it to it's full potential and bring the comedy to a high, the following scenes would have a greater impact on the audience. The following scene is Demetrius scorning Helena, which if performed well can bring the audience to a low. The scene could be so moving, the audience feel guilty for laughing at and enjoying the previous scene. The audience could then relate to the victims in the play, as they would feel that they have been a victim of guilt themselves. This is what I would hope the audience would get from my performance. ...read more.