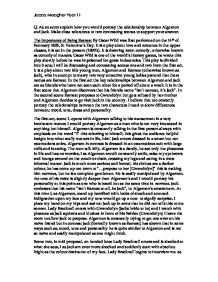 : As an actor explain how you would portray the relationship between Algernon and Jack.

Q: As an actor explain how you would portray the relationship between Algernon and Jack. Make close references to two contrasting scenes to support your answer. The Importance of Being Earnest By Oscar Wild was first performed on the 14th of February 1895, St Valentine's Day. It is a play about love and romance in the upper classes, it is set in the present (1890's). It is drawing room comedy, otherwise known as comedy of manors. Oscar Wild is one of the world's literary greats, he wrote this play shortly before he was imprisoned for gorse indecencies. This play is divided into 3 acts; I will be discussing and contrasting scenes one and two from the first act. It is a play about two idle young men, Algernon and Earnest (otherwise known as Jack), who in attempt to marry two very attractive young ladies pretend that there names are Earnest. In the first act the key relationships between Algernon and Jack are as friends who have not seen each other for a period off about a week. It is in the first scene that Algernon discovers that his friends name "isn't earnest, it's Jack". ...read more.

Lady Bracknell enters with Gwendolyn (Jacks bride to be) and I watch with pleasure as Jack squirms and blushes in front of Ms Fairfax (Gwendolyn) I leave the room to allow Jack to propose. Algernon is constantly trying to get one over on his naive friend but in contrast Jack (formally known as Earnest) has shown that in some ways such as; mood, tone and personality he is quite similar to Algernon and is not so naive and easily manipulated as one might think. Scene two, in mid proposal, on bended knee Lady Bracknell enters and is shocked at what she sees, I as Jack am even more shocked and suddenly start with absolute fright as the colour drains out of my face. Lady Bracknell begins to interview me as to my suitability to be married to her only daughter, I am extremely nervous, fiddling with my hand, running fingers through my hair and playing with my cuffs to show the audience just what an unpleasant situation it is. My voice is shaking. As the interview digresses I (Jack) starts to fell more comfortable with some of the questions, I starts to relax and gain more control over my emotions. ...read more.

emotions, I stand up and confess in contrast to Jacks statement that the whole situation has been a great success and tell Lane, smiling and arrogantly, to fetch my suits as I am going to go visit Jack in the country and propose to his beautiful young ward whom I am in love with. I believe that as an actor the relationship between Jack and Algernon is not a complicated one. I as Algernon want to be married to Jacks excessively pretty young ward. Jack wants to be wed to my excessively pretty cousin, in this case are wants are similar. We both want to live happy, aimless lives with the woman we love. In my opium the only differences between Algernon and Earnest are there moods, personality, dress and tone; they both want the same things. As an actor I would portray this relationship kindly, in the first scene we are good friends and in slight contrast the second scene we are friends who have had a dispute but both know that we cannot stay exasperated at each other for ever and indeed in the final act, not to give the conclusion away, our relationship concludes, happily. ?? ?? ?? ?? Jacob Meagher Year 11 ...read more.