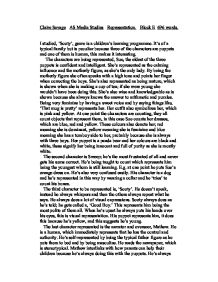 Claire Savage AS Media Studies Representation. Block E 696 words. I studied, 'Sooty', genre is a children's learning programme. It's of a typical family but is peculiar because three of the characters are puppets and one of them is human, this makes it interesting. The characters are being represented, Sue, the eldest of the three puppets is confident and intelligent. She's represented as the calming influence and the motherly figure, as she's the only lady. By being the motherly figure she often speaks with a high tone and points her finger when correcting the boys. She's also represented as being mature, which is shown when she is making a cup of tea; if she were young she wouldn't have been doing this. ...read more.

He's being taught to count which represents him being the youngest whom is still learning. E.g. at one point he puts Sue's orange dress on. He's also very confused easily. His character is a dog and he's represented in this way by wearing a collar and he 'tries' to count his bones. The third character to be represented is, 'Sooty'. He doesn't speak, instead he always whispers and then the others always repeat what he says. He always does a lot of visual expressions. Sooty always does as he's told; he gets called a, 'Good Boy.' This represents him being the most polite of them all. When he's upset he always puts his hands over his eyes, this is visual representation. His puppet represents him, it does this because he's yellow, and this suggests he's young. ...read more.

They are being actively engaged. The BBC as an institution is also being represented as it provides education and entertainment. The puppets are being represented by creation. The audience is being represented, which is targeted towards 2 - 7 year olds and the narrator, as the storyteller guiding the narrative. A lot of visual representation is used, e.g. when Sue points her finger she's represented as being demanding, also the objects as they represent each individual, such as honey for Sooty the bear. Self-representation is used by the three puppets, Sooty as he always follows Mathew; this shows us he's young and that he still follows his father figure. Sweep when he wants to play games and Sue wanting to play games because she won. In conclusion I think this programme was fair and accurate as everyone and everything was represented. ...read more.