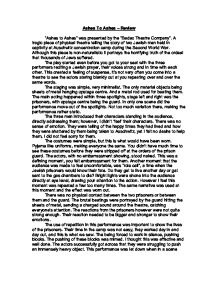 Ashes To Ashes - Review "Ashes to Ashes" was presented by the "Badac Theatre Company". A tragic piece of physical theatre telling the story of two Jewish men held in captivity at Auschwitz concentration camp during the Second World War. Although this piece is non-naturalistic it portrays the horrifying truth of the ordeal that thousands of Jews suffered. The play started even before you got to your seat with the three performers reciting a Jewish prayer, their voices strong and in time with each other. This created a feeling of suspense, it's not very often you come into a theatre to see the actors staring blankly out at you repeating over and over the same words. The staging was simple, very minimalist. The only material objects being sheets of metal hanging upstage centre. And a metal rod used for beating them. The main acting happened within three spotlights, stage left and right was the prisoners, with upstage centre being the guard. ...read more.

The reactions from the prisoners however were not quite strong enough. Their reaction needed to be bigger and stronger to show their emotions. The use of repetition in this performance was important to show the lives of the prisoners. Their time in the camp was not easy, they worked day in and day out, and this is what we saw. The being forced to work in silence, pushing blocks. The pushing of these blocks was mimed. I thought this was effective and well done. The actors successfully got across that they were struggling to push an immensely heavy object. This performance was let down when in a scene toward the end they walked around the stage as they were pushing the imaginary blocks. Their movement here seemed out of place, they were seemingly pushing the blocks with ease. I felt sure that one would collapse, but this didn't happen. The repetition of "role call" and the working got tiresome towards the end. ...read more.

The third prisoner greeted them at the doors of death, he explained to them where they should go in the chamber for the quickest death, to stop them suffering longer. Here the actors were again naked, as the Jews would have been. This added to the effect of the scene as it gave an uncomfortable feeling. As the gas was let into the chamber, the prisoner's emotions were high; their facial expressions successfully showed their feeling of panic and sadness. The recital of the Jewish prayer here was significant. It was entirely different to how it was said at the start of the performance. Instead of being blank and calm it was charged and panic stricken. The stage blacked out when they were on the floor. The actor of the guard was in the audience and he brought the performance to an end by summing up the story. Overall the intentions of the actors were clear. Ideas were creative and portrayed quite effectively. However, the characters needed more development so the audience could feel more emotionally involved, and for the performance to be more informative. ...read more.