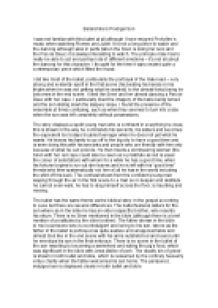 ﻿Balanchine?s Prodigal Son I was not familiar with this ballet at all although I have enjoyed Prokofiev?s music when watching Romeo and Juliet. It is not a long piece to watch and the dancing although slow in parts (when the Siren is doing her solo and the Pas de Deux) it is always interesting to watch. The principle male has to really be able to act and portray lots of different emotions ? it?s not all about the dancing for this character. I thought for the time it was created quite a contemporary piece which fitted the music. I did like most of the ballet, particularly the portrayal of the male lead ? very strong and evidently spoilt in the first scene (his beating his hands on his thighs when he was not getting what he wanted) ...read more.

He then meets a domineering woman (the Siren with her red cape could also be seen as a prostitute as red is usual the colour of solicitation) with whom for a while he has a good time, when his fortune begins to run out she leaves and he is left with his ?good time? friends who then systematically rob him of all he has in the world including the shirt off his back. The contrast shown from the confident young man leaping through the air in the first scene to a man so in despair and destitute he cannot even walk, he has to drag himself across the floor, is haunting and moving. The ballet has the same theme as the biblical story in the gospel according to Luke but there are several differences. ...read more.

The pampered, indulged son is displayed clearly in both ballet and bible. In ballet terms it is quite a surprising piece, the female lead is taller than the male which is unusual, the steps in the Pas de Deux are very slow and deliberate and some are quite acrobatic in appearance especially the lift where the son does it with his head through her legs rather than the usual style of lifting from the females waist. A pas de Deux you normally expect to display some emotion, romance, and sadness but here it is just strong athletic dancing with no emotion displayed. The dancing by the ensemble has an almost stamping, slapping quality ? there is little finesse here, which is what you expect with ballet steps. The high level of drama and acting required is unusual, in the final scene the son hardly dances at all, the emotion and angst shown is all down to acting ability. ...read more.