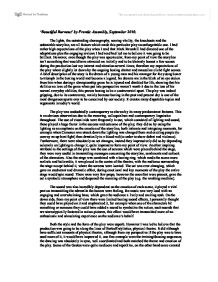 'Beautiful Burnout' by Frantic Assembly, September 2010. The lights, the outstanding choreography, searing vitality, the knockouts and the unbeatable storyline, are all factors which made this particular play an unforgettable one. I had rather high expectations of the play when I read that Mark Ravenhill had directed one of the adaptations plus the engaging reviews I had read had led me to believe it was going to be brilliant. However, even though the play was spectacular, from my point of view the storyline isn't something that would have attracted me initially and to be blatantly honest a few scenes during the production lost my interest and attention several times, therefore my expectations of the play where slightly let down by the ongoing boxing chatter and masculine clich� fight scenes. A brief description of the story is the dream of a young man and his manager for the young boxer to triumph in the boxing world and become a legend, his dreams are in the blink of an eye stolen ...read more.

Also the stage was combined with a boxing ring, which made the scene more realistic and believable, it was placed in the centre of the theatre, with the audience surrounding the stage accept behind it, where the screens were located. The set was ever-changing, which gave an exuberant and dramatic effect, during emotional and key moments of the play the entire stage would spin round. There were very few props, however the ones that were present, gave the set a symbolic atmosphere and deepened the meaning of the play (e.g. the washing machine). The sound was also incredibly dependent on the emotion of each scene, it played a vital part on transmitting the adrenalin the boxers were feeling, the music was very loud with an engaging and overwhelming base, which gave the audience a lively and exciting rush. On the down side, from my point of view there were limited boxing sound effects, I personally thought they could have played on it and emphasized it, for example when one of ...read more.

a directors message, showing how dangerous boxing is as a sport and how detrimentally staining and permanent the outcome can be injury wise, this scene was utterly entrancing. I connected most to this scene as I felt immense sympathy and sadness during this particular moment, as did everyone in the theatre. Frantic Assembly pulled off an outstanding performance, however my personal conclusion is mutual, I neither enjoyed it immensely nor did I dislike it. My final conclusion and memories of this play was that I was thoroughly impressed by the occasional build up of tension, exaggerated still images, the lighting, the shadows which echoed throughout the entire theatre and moreover the music, which was both penetrating and perfectly suited for this type of production. This production allowed the audience to uniquely enter and understand the boxing world in more depth, by expressing and transmitting the emotion into the audience, it unexpectedly highlighted the fighter's feelings and thoughts towards boxing and not just the clich� spectator view and opinion. Words: 1,017 ...read more.