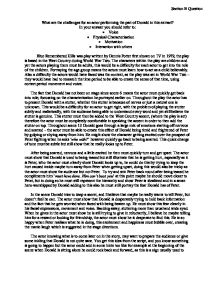 Blue Remembered Hills .What are the challenges for an actor performing the part of Donald in this extract? In your answer you should refer to: Voice Physical Characterisation Motivation Interaction with others

What are the challenges for an actor performing the part of Donald in this extract?

In your answer you should refer to:

Blue Remembered Hills was play written by Dennis Potter first shown on TV in 1979, the play is based in the West Country during World War Two. The characters within the play are children and yet the actors playing them must be adults, this would be a difficulty for each actor to get into the role of the children. Portraying the age group means the actors must learn how to act as a child believably. Also a difficulty the actors would have faced was the context, as the play was set in World War Two – they would have had to research the time period to be able to create the sense of that time, using correct period movement and voice.

The fact that Donald has not been on stage since scene 6 means the actor must quickly get back into role; focussing on the characterisation he portrayed earlier on. Throughout the play the actor has to present Donald with a stutter, whether this stutter is because of nerves or just a natural one is unknown. This would be a difficulty for an actor to get right, with the problem of playing the stutter subtly and realistically, with the audience being able to understand every word and yet still believe the stutter is genuine. This stutter must then be added to the West Country accent, (where the play is set) therefore the actor must be completely comfortable in speaking the accent in order to then add the stutter on top. Throughout scene 13 Donald goes through a large mix of emotions starting off nervous and scarred – the actor must be able to create this effect of Donald being timid and frightened of Peter by gulping or shying away from him. He might show the character getting excited over the prospect of Peter fighting when he asks ‘who with?’ however quickly go back to being scarred. This quick change of tone must be subtle but still show that he really looks up to Peter.

After being scarred, nervous and a little excited he then must quickly turn and get upset. The actor must show that Donald is used to being teased but still illustrate that he is getting hurt, especially as it is Peter, who the actor must clearly show Donald looks up to, he could do this by trying to keep the hurt caused inside maybe turn away from Peter when getting upset, doing this would also be tricky as the actor must show the audience but not Peter.  To try and win Peter back round after being teased he compliments him ‘must have done. Him can’t beatyou’ at this point maybe he should move closer to Peter, but in doing so he must still represent the hierarchy and show Peter is idealized and in a sense hero-worshipped by Donald adding to this also he must still portray the fear Donald has of Peter.

In the scene Donald tries to keep a secret, and I believe that maybe he really wants to tell Peter, but doesn’t feel he can. The actor must show that Donald is desperately trying to hold back information and the fact that he gets worried when faced with being beaten up. He must show this fear clearly in his facial expressions, movement and voice. Backing away, stuttering more than usual and wide eyed. When he gives in the actor must show he is still trying to give in reluctantly, I believe he maybe telling him for a reward or looking for friendship, the actor must show he is desperate to find this. He is so happy when Peter realises what he is doing, this excitement and happiness must bubble over, creating the manic laugh which is suggested in the stage directions.

The actor knowing what is to come later on in the story, may want to prepare the audience or give some inkling that Donald is not quite sane. You get this idea from the script, and you know something is going to happen but the actor could add in some hints too like for example at the beginning of the scene when Donald is sitting alone he could rock back and forward, as this is a sign usually used to show a problem with a persons mental health or when laughing at this point he could do it in such a way that gives the audience a clue.

The terror comes back to Donald when Peter tells him he will go to jail; the actor must quickly shift again from this excited state, back to being frightened. When Peter brings up his dad, the actor should show a clear reaction to this, showing he is deeply, emotionally hurt with the fact that his dad is missing. Donald is naïve and must be persistent that his dad would not be dead but fighting – the actor should really change at this point when talking of his dad, to show he is proud and believes strongly in him but Peter must shatter this, leading Donald back to being upset and hurt ‘My poor old dad’. This pain must really show through as it must be recognized enough by the child Peter to understand how hurt he is.

Peter changing the topic could relax Donald a little and therefore the actor although still holding the previous feelings of sadness, show that he prefers and is glad of the change in subject. Donald could slowly get more and more happy as they chat away about finding the squirrel and yet as soons as he has got a little more comfortable the actor has to change the atmosphere again at the mention of matches as this is a premonition of what is to come, and yet this must be only slight and will shift back again quickly to him being inquisitive of the squirrel found and Peter’s hurt face. Going back to the matches and the fact that he asks about burning things ‘Do you like setting things on fire’ must be said very clearly as it is a very important line – in foreshadowing events.

There are so many shifts in emotion through this scene. The actor must be able to portray each one, still holding on to the last to show it is one continuing scene. As in real life people especially children aren’t able to drop emotions quickly and therefore it will be tricky to keep this shift steady, subtle and accurate. Acting all this as an adult while trying to be a child would be very challenging, because this scene would be tough without the added challenge of playing a West Country young child in the 1940s. I believe each of these things must be taken into account when taking the role of Donald in order to give a successful performance.