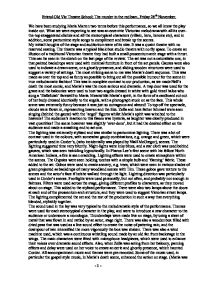 Bristol Old Vic Theatre School; The murder in the red barn, Friday 28th November. We have been studying Maria Marten two terms before this performance, so we all knew the play inside out. What we were expecting to see was an eccentric Victorian melodrama with all its over-the-top exaggerated clich�s and all the stereotypical characters (villain, hero, heroine etc), and in addition, some pantomime style songs to compliment and break up the scenes. My initial thoughts of the stage and auditorium were of its size. It was a quaint theatre with no reserved seating. The theatre was a typical black box studio theatre with no fly space. To create an illusion of a traditional Victorian theatre they had built a small proscenium arch stage with a thrust. This can be seen in the sketch on the last page of the review. The set was not a naturalistic one, in that painted backdrops were used with minimal furniture in front of the set panels. Gauzes were also used to indicate a dream scene, or a ghostly presence, and sliding wooden structures were used to suggest a variety of settings. The most striking scene to me was Maria's death sequence. ...read more.

There was also a wooden box filled with dried peas that was used as a live sound effect to create the noise of pattering rain, and the downpour of rain intensified the more vigorously the box was shaken. There was also a wind machine used, which was a continuous whistling sound made by an old fan from backstage in the wings. The main characters were fitted with microphone headpieces, which were used to enhance their voices over dramatic sound effects. Also, when Zella was acting from her balcony, panning effects and delay were used on her voice to create an eerie and ghostly presence, which haunted Corder. All accompaniment music and themes were pre-recorded. Some of the music used, in particular the gospel style music, in Maria's death scene, enhanced the action on stage. (Maria was played by Jennifer Biddal). Sound effects were used to compliment the performance and characterisations. Effects that added to the atmosphere were things such as the bird song heard in a country scene, and a noise of the hustle and bustle of market trade in the Victorian townhouse. The birds were sounded too present and were not at all realistic, but the city commotion was effective and gave a greater effect to the scene. ...read more.

A second scene that stood out was the London rooftop scene, in which simple puppets of Hawkshaw, (played by Ian Bonar) and Pharos Lee, (Steven Miller) were seen chasing William Corder, which had been carefully sculpted into comical and miniature caricatures of the characters were seen chasing after one another on a skyline silhouette of London in moonlight. The lights were only those of the streetlamps in the minute set, but they were very effective as everybody's eyes followed the characters. The scene was very carefully flown strait into another, and it produced an impressive and roaring reaction from the audience, and was thoroughly effective and was very entertaining to watch. I thought the play was very enjoyable to watch and directed magnificently. The best thing about the play, in my opinion, were the songs as they really made the play what is was and gelled everything together, creating a proper Victorian Melodrama. It was a pleasure to see. NB: (Cast: Maria-Jennifer Biddal; Annie-Hayley Doherty; Mr. Marten-Alexander Woolnough; Mrs. Marten-Dorothea Myer-Bennet; Tim-Alan Morrissly; William Corder-Niall McGregor; Ishmael-Bruce McNeal; Zella-Alix Dunmore; Pharos Lee-Steven Miller; Hawkshaw-Ian Bonar. Director-Christopher Denys.) Figure 1: The set KEY: Footlight. Victorian Streetlamp Stars indicate where the balconies were positioned Figure 2: Zella's costume - 1 - ...read more.