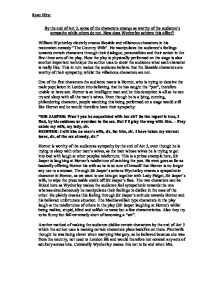 By the end of Act 3, some of the characters emerge as worthy of the audience's sympathy while others do not. How does Wycherley achieve this effect?

By the end of Act 3, some of the characters emerge as worthy of the audience's sympathy while others do not. How does Wycherley achieve this effect? William Wycherley cleverly creates likeable and villainous characters in his restoration comedy "The Country Wife". He manipulates the audience's feelings towards certain characters through their dialogue, personalities and their action in the first three acts of the play. How the play is physically performed on the stage is also another important technique the author uses to show the audience what each character is really like. This in turn makes the audience believe that the likeable characters are worthy of their sympathy, whilst the villainous characters are not. One of the first characters the audience meets is Horner, who is trying to deceive the male population in London into believing that he has caught the "pox", therefore unable to have sex. Horner is an intelligent man and he this deception is all so he can try and sleep with all the men's wives. ...read more.

He plainly creates this feeling through Sir Jasper's attitude towards Horner and his believed unfortunate situation. The Machiavellian type characters in the play laugh at the misfortunes of others in the play (Sir Jasper laughing at Horner) whilst being malice, stupid, blind and selfish to name but a few characteristics. Also they try to be funny but fall extremely short of becoming a "wit". Another method of making the audience dislike certain characters by the end of Act 3 which the author uses is making certain characters plans backfire on them. Pinchwife thought he was being clever when marrying Margery, as he believed because she was from the country, not used to London life and would therefore not commit any acts of adultery across him. Comically Wycherley makes this not to be and when Mrs. Pinchwife learns of a man at the play who also has eyes for her she cannot wait to meet him at the next available opportunity: "Mrs Pinchwife Why! ...read more.

He thinks a lot of himself, especially in terms of his "wit": "SPARKISH ... we speak more wit, and so become the poet's rivals in his audience. For to tell you the truth, we hate the silly rogues..." Sparkish is given an extremely arrogant personality by the author, which makes the audience dislike him from the start. He believes that he, along with his peers, are the playwright's rival, due to the "wit" they obtain. The feeling of dislike towards Sparkish, which would be present in the audience, opens the door in a way for Harcourt to make grounds with Sparkish's wife to be, Alethea. As they do not like him they are pleased that Harcourt is making a fool out of him by seeing his future wife cheat on him with another man. Wycherley repeatedly manipulates the audience's feelings towards his characters through their actions, dialogue and their personality. By the end of Act III the audience feels sympathetic towards some characters where in some cases their feelings are at the different end of the spectrum towards others. Ryan Hirst ...read more.