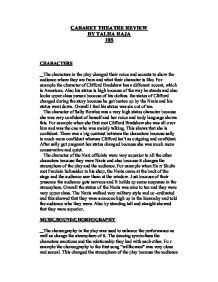 The characters in the play changed their voice and accents to show the audience where they are from and what their character is like. For example the character of Clifford Bradshaw has a different accent, which is American. Also his status is high because of the way he stands and also looks upper class person because of his clothes. the status of Clifford changed during the story because he got beaten up by the Nazis and his status went down. Overall I feel his status was six out of ten.

The character of Sally Bowles was a very high status character because she was very confident of herself and her voice and body language shows this. For example when she first met Clifford Bradshaw she was all over him and was the one who was mainly talking. This shows that she is confident. There was a big contrast between the characters because sally is much more confident whereas Clifford isn't as outgoing and confident. After sally got pregnant her status changed because she was much more conservative and quiet.

The character of the Nazi officials were very superior to all the other characters because they were Nazis and also because it changes the atmosphere of the play and the audience. For example when Herr Shultz met Fraulein Schneider in his shop, the Nazis came at the back of the stage and the audience saw them at the window. Just because of their presence the audience gets nervous and It builds up some suspense in the atmosphere. Overall the status of the Nazis was nine to ten and they were very upper class. The Nazis walked very military style and co-ordinated and this showed that they were someone high up in the hierarchy and told the audience who they were. Also by standing tall and straight showed that they were superior.

The choreography in the play was used to enhance the performance as well as change the atmosphere of it. The dancing symbolises the characters emotions and the relationship they had with each other. For example the choreography to the first song "willkomen" was very close and sexual. This changed the atmosphere of the play because the audience were slightly edgy because of the explicit content. The dance showed that the characters emotions were lively and happy. The relationship between the dancers was very close and sexual.

Music in the play was usually fast and the style was almost the same. The music was used to show the emotions of the characters and it changed the atmosphere of the play and in the audience. For example the song "so what?" which was sung by the character Fraulein Schneider was rather slow and emotional. Instead of the song being fast and sexual this wasn't and was a big contrast with the other songs and choreography. The music communicated the emotions of fraulein because at that point of the play she was sad and depressed and so it communicated her emotions well.

Another song in the play which was different and which the audience enjoyed listening to was the song called "it couldn't please me more."(a pineapple). The song was funny because of the words as well as the acting with it. The atmosphere changed to a much more relaxed feeling. This scene and song was the only part which the audience really found funny. This scene and song was the only happy part as afterwards the Nazis came and put the atmosphere to a sinister and ominous feeling. This was another good contrast during the play.

The costumes in the play were used to show the status of the character. Type of character and to explain to the audience who the character is. For example the Nazi costumes were very realistic and accurate to detail. The costumes gave the impression of someone in high authority and high status both mentally and politically. Also as the audience knows about the Nazis from history and recognise the costume, it leaves the impression their head f them being evil and people who hate the Jews.

Another example of costumes in the play was those of the Kit-Kat club. The costumes are used to exaggerate sex and the characters feelings. As he clothes are tight and revealing it makes the audience feel it is sleazy and dirty. However if you look past the clothes and the sex, at the time that was happening, it was just before the Nazis came. This meant that they had freedom and they could have fun. However when the play went on the sex stopped and the dancing was not as erotic. The costumes that they were wearing showed that they were lower class people and the clothes showed that they are from a club.

The make up in the play was very much exaggerated and it wasn't really used naturalistically. For example emcee's make up was very much exaggerated and almost made him look like a clown. This made the audience laugh and was most probably used for humour. It suited the character of emcee because he was very lively and acted like a clown. However the make up was probably used to represent something inhuman because at that time the people who were in the sex business were looked down upon by the higher class citizens and this make up was used to show their class and tell the people who they are.

The set design in the play was naturalistic and communicated to the audience the time the play was set. For example when the Nazis took over and Fraulein Schneider and Herr Schultz were talking, the lighting became darker and you could see the window at the back which was a great effect and was the only thing on the stage. This made the audience feel cold and left a trickle of suspense in the atmosphere. Also the star of David showed what was happening at that time and that was Hitler discriminating the Jews. The window and the emptiness of the stage made an effect upon the audience of something sinister and there is going to be a change.

The set design in the play was changed very smoothly and quickly without interfering with the pace of the performance. For example during a song the change of setting was going to be long so they actors included the changeover with the dancing. This made it look interesting to the audience and something different. By doing the dancing with the changeover it made the audience keep their eyed on the dancing and they wouldn't realise what is happening until it has actually happened.

Lighting in the play depended on the mood depended on the mood of the character. For example when the Nazis came to the shop everything on the audience was that something sinister was going to happen and at that there was a chill at the back of the audiences' neck. If the character was happy the lighting would be bright and if they were sad or evil the lighting would be dark.

At the end of the play when the Jews were naked and were putting their arms around each other the lighting became much brighter than before. Everything became white and the snow came which added a strong effect on the audience. As this was a symbolic and emotional scene for the audience. However the atmosphere changes from dark and evil to hope and togetherness. This has an emotional effect in the atmosphere and leaves a glimmer of hope.

Cabaret is a performance about the persecution of the Jewish people during the Second World War. We know this because the Nazi officials put the Star of David on Herr Shultz shop window. The Nazis did this to show that the shop is a Jewish person so that the citizens don't go in to them. Hitler said that Jewish people are not true Germans and are not in the Aryan race so they have to be persecuted. This is an example of Jews being persecuted.