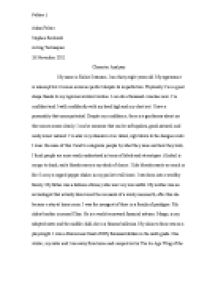 Character Analysis My name is Richie Swanson. I am thirty-eight years old. My appearance is unkempt but it comes across as perfect despite its imperfection

﻿Peltier Adam Peltier Stephen Rockwell Acting Techniques 26 November 2012 Character Analysis My name is Richie Swanson. I am thirty-eight years old. My appearance is unkempt but it comes across as perfect despite its imperfection. Physically I?m in great shape thanks to my rigorous workout routine. I can do a thousand crunches now. I?m confident and I walk confidently with my head high and my chest out. I have a personality that oozes potential. Despite my confidence, there is a gentleness about me that comes across clearly. I can be someone that can be soft-spoken, good-natured, and really sweet natured. I?m also very obsessive over detail, right down to the designer suits I wear. ...read more.

My claim to fame was as a playwright. I won a Braverman Grant of fifty thousand dollars in the ninth grade. One winter, my sister and I ran away from home and camped out in The Ice Age Wing of the Public Archives. Several years later after high school I ran away to the family summer house in Bruges. There I stayed for two weeks writing a new play. The play was a critical failure and was perfumed on Broadway for less than a week. I gave up writing after that and went on to the prestigious Harvard University. Once there I took up recreational drugs and sports. I found that hitting a ball with a racket was quite easy and decided to take-up tennis. ...read more.

At this point it had been about eight years since I wrote anything of substance, because of this I decided to write again. In just four weeks I had written an entire novel about General Custer and what would have happened if he didn't die at Little Bighorn. It was called Custer's First Stand. It was a work of fiction. The novel soon got published and I gained a moment of literary success. Now I lounge around the house, mostly in a bathrobe. I like to take pictures of things and I think I might take up painting. I love my wife, but as my therapist she has a sneaking suspicion that I am in love with my adopted sister. I fear that my life will leave me. Concerning my family as a whole, all memory of brilliance has been completely erased after twenty years of failure. ...read more.