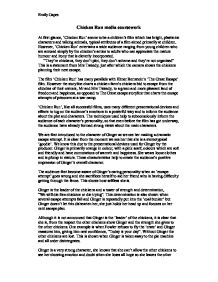 Chicken Run media coursework At first glance, 'Chicken Run' seems to be a children's film which has bright, plasticine characters and talking animals, typical attributes of a film aimed primarily at children. However, 'Chicken Run' entertains a wide audience ranging from young children who are amused simply by the chicken's antics to adults who can appreciate the mature humour and irony that is cleverly incorporated. "They're chickens, they don't plot, they don't scheme and they're not organised" This is a statement from Mrs Tweedy, just after which the camera shows the chickens planning their next escape. The film 'Chicken Run' has many parallels with Elmer Bernstein's 'The Great Escape' film. However the storyline charts a chicken farm's chickens bid to escape from the clutches of their owners, Mr and Mrs Tweedy, to a green and more pleasant land of freedom and happiness, as opposed to The Great escape storyline that charts the escape attempts of prisoners at a war camp. 'Chicken Run', like all successful films, uses many different presentational devices and effects to tug on the audience's emotions in a powerful way and to inform the audience about the plot and characters. The techniques used help to subconsciously inform the audience of each character's personality, so that even before the film has got underway, the audience have already formed strong views about the main characters. ...read more.

She walks with a loud and purposeful stride and the beat of her black Wellington boots strikes fear into the hearts of the chickens, it almost imitates a clock, slowly ticking the seconds of the chicken's lives away. It is ironic that the advert for 'Mrs Tweedy's chicken pies' features the logo 'the woman's touch' as Mrs Tweedy is totally lacking in femininity. The first sign the audience get of the extent of Mrs Tweedy's true character is in the death of Edwina. Mrs Tweedy smiles when she takes Edwina to be executed suggesting that she takes pleasure in the death of a chicken. The death is made even more gruesome by the use of the silhouette that is shown to represent the death of Edwina. This is a typical horror film technique. The producer has made sure that when she is in shot, Mrs Tweedy fills the whole screen. This deliberate technique creates the impression that Mrs Tweedy is a very dominant and aggressive individual who doesn't need or want anyone else in her life for love or for friendship. Mrs Tweedy is also featured in many 'low angle shots', like when she does her weekly 'chicken inspection', this has the effect of power and authority of both the chickens and the audience. ...read more.

The audience is led to believe this is the happy ending but to complicate matters, Mrs Tweedy has attached herself to the string of lights hanging from the plane and puts the happy ending in jeopardy. This results in an action-packed battle of Ginger versus Mrs tweedy, representing the sides of good and evil. Here Gingers intelligence and courage really shine through as she selflessly fights with Mrs Tweedy. This scene really emphasises the size difference between Mrs Tweedy, a large intimidating woman, and small, vulnerable Ginger but this detail does not faze Ginger as she remains focused on the task she knows she must do. These moments are made even more realistic by the camera shot used here; the audience see the feud from Ginger's point of view which puts them at the forefront of the action. Ginger's determination pays off when Ginger tricks Mrs Tweedy (and the audience) into thinking she has had her head chopped off before dramatically letting go of the rope attaching Mrs Tweedy to the plane to ensure a happy ending is had by all (with the exception of Mrs Tweedy)! From Mr Tweedy's opening comment, "No chicken escapes from Tweedy's farm" to their final escape to a 'chicken sanctuary', their green and pleasant land of freedom, the hhhhhhhaudience is taken on an animated roller-coaster ride of action, adventure and emotion. Emily Capes ...read more.