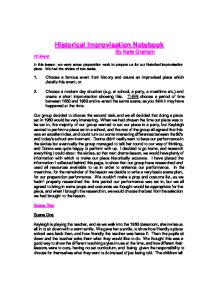 Choose a modern day situation (e.g. at school, a party, a mealtime etc.) and create a short improvisation showing this. THEN choose a period of time between 1850 and 1960 and re-enact the same scene, as you think it may have happened at the time.

Historical Improvisation Notebook By Kate Graham 7th March In this lesson, we were some preparation work to prepare us for our historical improvisation piece. We had the choice of two tasks, 1. Choose a famous event from history and create an improvised piece which details this event, or 2. Choose a modern day situation (e.g. at school, a party, a mealtime etc.) and create a short improvisation showing this. THEN choose a period of time between 1850 and 1960 and re-enact the same scene, as you think it may have happened at the time. Our group decided to choose the second task, and we all decided that doing a piece set in 1960 would be very interesting. When we had chosen the time our piece was to be set in, the majority of our group wanted to set our piece in a party, but Kayleigh wanted to perform a piece set in a school, and the rest of the group all agreed that this was an excellent idea, and could turn out some interesting differences between the 60's and today's school environment. Donna didn't really want to base our performance in the sixties but eventually the group managed to talk her round to our way of thinking, and Donna was quite happy to perform with us. I decided to go home, and research everything I could about the sixties, so that next drama lesson, we would have plenty of information with which to make our piece historically accurate. I have placed the information I collected behind this page, to show that our group have researched and used all resources available to us in order to enhance our performance. In the meantime, for the remainder of the lesson we decide to write a very basic scene plan, for our preparation performance. We couldn't make a prop and costume list, as we hadn't properly researched the time period our performance was set in, but we all agreed to bring in some props and costumes we ...read more.

Also the clothes are very important, as we have to show that these women are upper class, and the clothes will help to show this. Tape of Charleston - The music is very important too, as you have to expect music at a party music you don't expect people to dance to nothing, also, the music helps to set the party scene off, and to help the audience to see that the scene has been changed. Part Two, the 1930's Scruffy clothes - The clothes in this scene are important, as they help to show the difference between the characters in this scene. Dave, has the scruffiest clothes, as he is the poorest. He is closely followed by Mort, who has slightly less scruffy clothes, as he is not as poor as Dave. Nice clothes - The nice clothes are to be worn by Dora, who is considerably better off than both Dave, and Mort. She has to be, to be able to afford a TV in those days. Tv. - We need a TV to watch in Dora's, a cardboard box with buttons drawn on the front will, do, Chairs - We need somewhere to sit when we all watch the TV. Part Three, the 1940's Cardigan and grey wig - These clothes are important for the grandmother to wear, to help to show her age. Most grandmothers are stereotyped as having grey hair, and wearing cardigans, so it will be easy for the audience to see she is the little girl's grandmother from her clothing. Nightdress - The little girl will wear this, so the audience can see she is going to bed. Apron, shirt and tie - So the audience can understand that the baker is a man. The apron helps to show the audience his profession. Apron - A polka-dotted apron for the baker's wife to wear, again, this helps to show what she does for a living. ...read more.

Second Objective 8/10 - I felt I demonstrated a clear understanding of the task set, demonstrated imagination, perception and sensitivity, and showed a clear understanding of the task set. Third Objective 16/20 - I felt I created and sustained a number of credible roles showing awareness, sensitivity and understanding. I also felt I used my voice and body language effectively, and appropriately for the character I was playing at the time. I thought I communicated ideas and feelings successfully. Total Mark 32/40 or an A When I had evaluated my performance myself, my teacher told me what marks I had obtained for each objective; First Objective 9/10 - She felt I had shown a high level of achievement in terms of personal response and understanding of the skills and techniques needed to realise ideas, and she too thought my voice was loud and clear throughout the performance. Second Objective 9/10 - She felt I fully recognised the potential of the stimulus, and demonstrated a high level of imagination, perception and sensitivity as well as having a full understanding of the task set. Third Objective 18/20 - She felt I created and sustained totally credible roles that demonstrated a high degree of accuracy and insight, performed convincingly using voice and movement with expertise, and communicated ideas and feelings in a way which excited and delighted. She particularly pointed out that when I was in character I was totally in role, and committed to that role. She also said that when I was playing the baker's wife in the third part of the performance, and I was speaking directly to the audience in my thought track, she really felt sorry for me when I told her about my son, and the troubles me and my husband were having. Total Mark 36/40 - or an A I was very pleased with the mark I received, and I got some interesting feedback both from my classmates, and my teacher, which, I think will enable me to improve my performance in our next performance. ...read more.