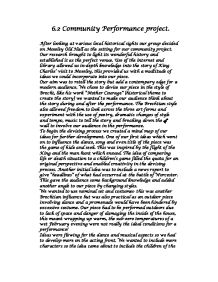 6.2 Community Performance project. After looking at various local historical sights our group decided on Moseley Old Hall as the setting for our community project. Our research brought to light its wonderful history and established it as the perfect venue. Use of the internet and library allowed us in-depth knowledge into the story of King Charles' visit to Moseley, this provided us with a multitude of ideas we could incorporate into our piece. Our aim was to retell the story but add a contempary edge for a modern audience. We chose to devise our piece in the style of Brecht, like his work "Mother Courage" [historical theme to create the story] we wanted to make our audience think about the story during and after the performance. The Brechtian style also allowed freedom to look across the three art-forms and experiment with the use of poetry, dramatic changes of style and tempo, music to tell the story and breaking down the 4th wall to involve our audience in the performance. To begin the devising process we created a mind map of our ideas for further development. One of our first ideas which went on to influence the dance, song and even title of the piece was the game of hide and seek. This was inspired by the flight of the King and the man hunt which ensued. The idea of comparing life or death situation to a children's game filled the quota for an original perspective and enabled creativity in the devising process. Another initial idea was to include a news report to give "headlines" of what had occurred at the battle of Worcester. This gave the audience some background knowledge and added another angle to our piece by changing styles. We wanted to use nominal set and costumes- this was another Brechtian influence but was also practical as an outdoor piece involving dance and a promenade would have been hindered by excessive costume. ...read more.

We also did not consider how low the branches of the tree's we were working with were; this resulted in a lot of crouching and the loss of my hat during the performance! One of the last things we decided to add to the piece whilst developing other ideas was the Kings monologue. This involved using period language and expression and was included to provide an insight into the impact the recent events and current situation had had on the king. It gave an emotional and more in depth account of what he had experienced. After seeing the chapel in the house where Charles had actually prayed we decided to turn this monologue into a prayer with God as Charles audience. As we were unable to perform inside the house (it was not practical to lead a procession through the house due to lack of space and he amount of time it would take), we set the monologue in a gazebo in the gardens. This change of setting from an open lawn to a small building was another Brechtian influence - it again required thought from the audience and removed the "theatre" feeling. The monologue itself was created through hot seating one another in character as the king, we questioned one another to gain an idea of emotions and thoughts we perceived Charles may have been experiencing (See Appendix 3 for monologue). This monologue added another scene which was entirely individual in style to all the others, in keeping with our chosen practitioner's technique. In response to our continued research came the "village scene". We found out that the Pendrel brothers who accompanied the king from Boscobel House to Moseley Hall were asked by Mr. Whitgreave to go into Wolverhampton to see if any rumours we circulating in the town concerning the king's whereabouts. Aside from the dance, this was the most contempary piece in style. ...read more.

However, we did carry the piece off successfully. Performing in the dark gave the piece a more menacing feel that had never really been present in rehearsals but it also hindered it. A sinister atmosphere was created for the second, more menacing half of the dance but also meant we kept bumping into branches and each other; this was beneficial to the childlike first half as it made us more active as characters with more stumbling travel and lots of ducking and weaving. After the dance the general response from the audience was one of confusion, although some of the children present knew exactly what they had witnessed. This meant we had achieved our goal, like Brecht we wanted our audience to question what they were seeing and make them think about the story that our dance was telling. We had a couple of minor problems; with the noise of our audience during the procession and the louder than expected rush hour traffic noise from the nearby M6 our singing during the promenade was too quiet, this is definitely something that could have been improved upon as the words were important to the story telling. We had a similar problem with the dance; the music was not very loud so it was a bit tricky to keep in time as we could barely hear the beat. However, we persevered and the dance ran smoothly. Other than that we did not experience any major problems, there was a sticky moment after the news report when myself and Luke had to change backstage in the dark and lost parts of our costume but we pulled it together and managed to be out front to start the promenade on time! Apart from the freezing, dark conditions our community project was great fun to do. It enabled us to experiment with Brechts technique, develop our ability to use real settings and natural props in our performance and also gave us a great historical insight into our local heritage. Total of 3,047 words. ...read more.