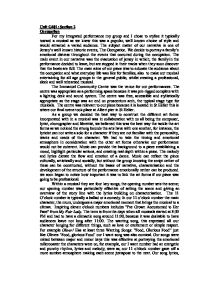 Community Performance. The main aims of our piece was to educate the audience about the occupation and what everyday life was like for families, also to make our musical entertaining for all age groups in the general public,

Unit G401; Section 2 Occupation For my integrated performance my group and I chose to stylise it typically toward a musical as we knew this was a popular, well known choice of style and would attracted a varied audience. The subject matter of our narrative is one of Jersey's well known historic events, The Occupation. We decide to portray a family's emotional distress throughout the events that occurred during the occupation. The main event in our narrative was the evacuation of jersey in which, the family in the performance decided to leave, but are stopped in their tracks when they soon discover that the boats are full. The main aims of our piece was to educate the audience about the occupation and what everyday life was like for families, also to make our musical entertaining for all age groups in the general public, whilst creating a professional, sleek and well rehearsed musical. The Immanuel Community Centre was the venue for our performances. The centre was appropriate as a performing space because it was pre-rigged complete with a lighting desk and sound system. The centre was free, accessible and stylistically appropriate as the stage was an end on proscenium arch, the typical stage type for musicals. ...read more.

The wanting song, this expressed all our character longing for different things, such as love or excitement or simple respect. For example Oliver! Has at least three Wanting Songs: "Food, Glorious Food" just like Olivers 'Food, glorious Food' our I want song was also comical. Our songs were mixed between major and minor keys this was effective at portraying the emotional rollercoaster the characters were on, for example, our I want number had an energetic and punchy rhythm, lyrics and melody, were as, our 11 o'clock number gave off a more sombre atmosphere making each scene juxtapose to the next. Our song lyrics, accompanied by the key of the harmonies, had great emotionally effect portraying the characters feelings successfully to the audience making them feel more emotionally involved with the narrative, further developing our musical realistically. The choreographic content of our piece also aided the emotional shifts in the songs and drama, helping the musical flow coherently from one scene to the next. When all the improvisation was polished enough we began rehearsing the musical coherently which we hadn't yet done as we had been rehearsing the different art forms separately, so in our rehearsal we prioritised making sure the link between scene flowed effectively we did this by making sure we knew our lines, ensuring the songs were pitch faultless and perfecting dance routines making sure we were all in unison when needed to be. ...read more.

Though something we could have improved on was improving our characters, we could have done this by working together to create all characters and then split them between us. If we had to devise the performance again I think we would use proxemics more effectively to portray the relationships bounds between each character to the audience more efficiently, furthermore I believe we should of included more harmonies in our musical numbers as when we did do them they worked successfully and created depth and emotion. We effectively danced in unison this created a real sense of unity between the family even when the everts in the narrative reach an all time low, but to balance the out we also used cannon to show although the family were unified the still had their individual traits. Overall, I think our final piece was high-quality as we all put so much time and effort into our musical. Our aims were to professionally educate and entertain the general public, this we did with success. This was clear as the audience too felt the emotional on goings during the performance. We successful engaged the audience by breaking the fourth wall, having strong and punchy dances which juxtaposed with some of the soft lyrics. We used a wide range of techniques to create tension and atmospheric emotion which effectively portrayed our dramatic ability to the audience. Evaluation ...read more.