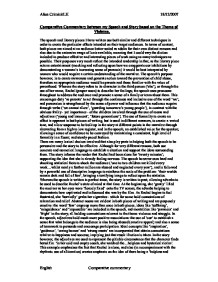 Comparative Commentary between my Speech and Story based on the Theme of Violence.

Comparative Commentary between my Speech and Story based on the Theme of Violence. The speech and literary pieces I have written use both similar and different techniques in order to create the particular effects intended on their target audiences. In terms of context, both pieces are aimed at an audience better suited as adults for their own distinct reasons and also due to the extensive range of lexis available; meaning that I could vary the diction included to produce effective and interesting pieces of work using as many techniques as possible. Their purposes very much reflect the intended readership in that, as the literary piece acts as entertainment (mocking and reflecting upon how we exaggerate our inhibitions by demonstrating a woman's increasing sense of paranoia) it would be best interpreted by women who would acquire a certain understanding of the narrative. The speech's purpose however, is to create awareness and generate action toward the prevention of child abuse, therefore an appropriate audience would be parents and those familiar with the value of parenthood. Whereas the story refers to its character in the third person ('she'), or through the use of her name, Rachel (proper noun) to describe her feelings; the speech uses pronouns throughout to address the audience and promote a sense of a family or team about them. ...read more.

In the last paragraph, the use of metaphor ('Rachel froze') becomes apparent with the use of words in the same semantic field following it ('flooding...source'). All words are relevant to water and so evoke a climatic sense of power about her paranoia. A simile with lexis from the same semantic field is also present in the story ('rooting an ugly black burn... fumes climbing the air like a fast growing shrub') with diction relative to plants, and similarly is used in the speech through metaphor ('whether is stems from poverty... dig up the roots...and tend to them so that they grow'). The idea of something growing and evolving is present in both, but in the story what is growing is a sense of distress, whereas in the speech the intention is to grow to be 'victorious in the battle against child abuse'. The imperative, 'we must be confident that we can overcome the nightmares that leave the younger community waking up only to be faced with prostitution, drug addiction, and violence' also uses metaphor and lexis from the same semantic field; the thought of sleep feeds off peaceful connotations, however this example reinforces the fact that these children aren't at peace and never are to leave a lasting impression. ...read more.

The speech carries on from its introduction by painting a picture of the dilemma and producing a problem for the audience to solve. The solution is made to inspire action through the use of interrogatives, imperatives and emotive vocabulary and then concludes in the last two paragraphs. 'The twelve year old boy, battered and bruised every night, the young baby left crying for days, and the teenage girl who silently cries as her father enters the room. We can stop this'. This powerful use of three-part listing brings shocking and unbearable thoughts to mind, and the belief that the audience can aid the deterrence of this leaves a lasting impression. The final paragraph is used to reassure the audience and promise a successful future ('and though stormy weather will try to hold us back, a clear future...is waiting ahead'), adding support and encouragement also. The story seemed to lack in its professionalism and effectiveness compared to the speech, the methods available weren't used to the best of their potential and there are many improvements that could be made to rectify this. The speech uses many more literary techniques in order to produce an effective piece of writing that can encourage its audience to act against child abuse, and I feel it does this in a persuasive and passionate manner. Alice Crimini/LH 18/12/2007 English Comparative commentary ...read more.