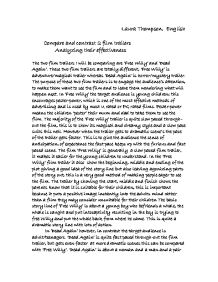 Laura Thompson, English Compare and contrast 2 film trailers Analyzing their effectiveness The two film trailers I will be comparing are 'Free Willy' and 'Dead Again'. These two film trailers are totally different, 'Free Willy' is adventure/magical trailer whereas 'Dead Again' is horror/mystery trailer. The purpose of these two film trailers is to engage the audience's attention, to make them want to see the film and to leave them wondering what will happen next. In 'Free Willy' the target audience is young children; this encourages pester-power, which is one of the most effective methods of advertising and is used by most U rated or PG rated films. Pester-power means the children 'pester' their mum and dad to take them to see the film. The majority of the 'Free Willy' trailer is quite slow paced through-out the film, this is to show its magical and dreamy style and a slow pace suits this well. However when the trailer gets to dramatic scene's the pace of the trailer gets faster. This is to give the audience the sense of anticipation, of expectance the fast pace keeps up with the furious and fast paced scene. The film 'Free Willy' is generally a slow paced film tralier, it makes it easier for the young children to understand. ...read more.

Lighting is an important part of any film production and we can make several comments about the lighting from both these trailers. In 'Free Willy' at the beginning the sun is reflecting on the sea, it all looks happy and tranquil, but when the whale gets caught and put in captivity the lighting is quite dark to reflect how the whale is feeling and the general mood of the film. When however the young boy comes along the lighting brightens up because the whale is happy and not alone any more and the whale knows that the young boy understands how he is feeling and that the young boy is trying to help him. At the beginning of 'Dead Again' the lighting is dark and mysterious it creates the feeling that it is going to be full of twists and turns and that it's a mysterious film. So much darkness emphasizes the fear of the unknown. People generally want the unknown to be explored this is used here as a good advertising technique people are scared of the unknown so want to explore it so they know what is there by going to see the film they can do this. Dialogue is considered by some as the most important part of the In 'Free Willy' the young boy's voice is gentle and soothing, he also talks slowly and clearly so the young children watching the film can understand what he is saying. ...read more.

As each drum beat is heard the tension grows, as the drama unfolds the music gets louder and also adds more instruments in to it, this makes the atmosphere eerie. The plucking of the double base adds even more eeriness. There is a drum roll at the end and drum rolls always leads up to something exciting this leaves the viewer in suspense. Visual effects in the trailers are fairly straight forward. In 'Free Willy' there are not really any visual effects, as it is a children's film. 'Dead Again' uses lighting, black and white to reflect the past events and that the film is not just straight forward one of the visual effects used is spinning newspapers to the setting of the past. The costumes in the trailers vary greatly 'Free Willy' uses solely 1990's causal clothing (American clothing). This is for a naturalistic feeling as that is the feeling wanted to be represented by the director. 'Dead Again' uses 1940s and 1990s clothing the 1940s clothing is for the past events. Overall both trailers use different effects to great use. 'Dead again' using the chilling music and sound effects to really set up the horror genre and make the viewer want to see the rest of the film. 'Free Willy' however is more concerned with the feel good factor and pester-power of the trailer making seeing the full film a necessity. ?? ?? ?? ?? ...read more.