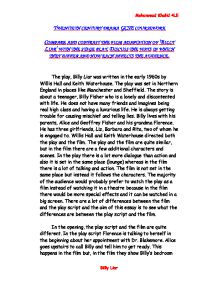 Compare and contrast the film adaptation of 'Billy Liar' with the stage play. Discuss the ways in which they differ and how each affects the audience.

TWENTIETH CENTURY DRAMA GCSE COURSEWORK COMPARE AND CONTRAST THE FILM ADAPTATION OF 'BILLY LIAR' WITH THE STAGE PLAY. DISCUSS THE WAYS IN WHICH THEY DIFFER AND HOW EACH AFFECTS THE AUDIENCE. The play, Billy Liar was written in the early 1960s by Willis Hall and Keith Waterhouse. The play was set in Northern England in places like Manchester and Sheffield. The story is about a teenager, Billy Fisher who is a lonely and discontented with life. He does not have many friends and imagines being real high class and having a luxurious life. He is always getting trouble for causing mischief and telling lies. Billy lives with his parents, Alice and Geoffrey Fisher and his grandma Florence. He has three girlfriends, Liz, Barbara and Rita, two of whom he is engaged to. Willis Hall and Keith Waterhouse directed both the play and the film. The play and the film are quite similar, but in the film there are a few additional characters and scenes. In the play there is a lot more dialogue than action and also it is set in the same place (lounge) whereas in the film there is a lot of talking and action. The film is not set in the same place but instead it follows the characters. ...read more.

If there was no dialogue in the play script then the characters would be doing nothing but sitting in the lounge. In the film there are a lot of scenes, which is why the characters talk less. The reason for this is because in the film special effects are used which makes it easier for the audience to understand. In the play script, some characters explain scenes, which we never saw instead the audience were informed that this happened when Rita was telling Billy that she heard that Billy was with another girl in his house. In the film the audience watches this scene, "Well, you didn't then- because somebody saw you. Sitting in the Gaumont. With your arm round a lass eating oranges" The setting in the play script and in the film is quite different. In the play script the set consists of a living room, hallway and a section of the garden of Geoffrey Fisher's house. To the left of the stage in a small garden containing a small garden seat. There is a door in the living room leading to the kitchen. The living room is over dressed. In the film the audience is shown the train station and Billy's workplace, the town centre, the cafe and also Billy's bedroom. ...read more.

He tells her that he will get some milk and then intestinally misses it. The on the way back home he has another fantasy. In the film Billy's grandmother dies in the same time that he dies in the play script. The film style is a bit different to the play style because in the play it is much more relaxed and slow whereas in the film, the characters are much more active and have more parts to play. In the play script there is much more detail because the audience would need to know what the characters look like and what the setting is whereas in the film the audience could see it and could understand it easily. The play script is slightly much more humorous as there is a lot of description. The film version of Billy Liar is slightly different compared to the play script version of it. The differences include the dialogue, the opening the description of Billy and the focus. The focus is mainly on Billy in the play script whereas in the film it is on his family and his girlfriends. The play portrays the life in the early 1960's where older people used to look down upon teenagers as is it is in the play where Billy's parents and grandmother look down upon him. Mohammad Khalid 4LE Billy Liar ...read more.