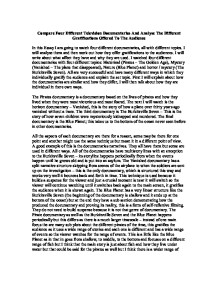 Compare Four Different Television Documentaries And Analyse The Different Gratifications Offered To The Audience In this Essay I am going to watch four different documentaries, all with different topics. I will analyse them and then work out how they offer gratifications to the audiences. I will write about what affect they have and why they are used. I watched four different documentaries with four different topics: Historical (Pirates - The Golden Age), Mystery (Vanished - The plane that disappeared), Nature (Blue Planet) and horror / mystery (The Burkitsville Seven). All are very successful and have many different ways in which they individually gratify the audience and explain the set topic. First I will explain about how the documentaries are similar and how they differ, I will then talk about how they are individual in there own ways. The Pirates documentary is a documentary based on the lives of pirates and how they lived when they were most victorious and most feared. The next I will watch is the horizon documentary - Vanished, this is the story of how a plane over thirty years ago vanished without a trace. The third documentary is The Burkitsville Seven - This is the story of how seven children were mysteriously kidnapped and murdered. The final documentary is the Blue Planet; this takes us to the bottom of the ocean never seen before in other documentaries. ...read more.

The airplane documentary is a bit like this in how they explain what happens and how the events mount up and then the show possible solutions only revealing the most truthful way at the end. The Pirate documentary doesn't have as much suspense as the other one but it does have mini stories, which have twists, they leave the viewer anticipating the moves for a while and then they tell them what happens. The blue planet has suspense but this suspense is a different type to the others, They use the suspense that they are exploring the deep seas for the first time with new equipment and they don't know what will happen to them or what they will find. This is a form of suspense but this isn't an edge of the seat suspense that leaves the viewer in deep thought but marveled when they find the new species and this gratifies the audience because they are seeing things that a documentary has never done before. Another main feature of the documentaries is the narrator; all of the documentaries have a narrator, which fits a specification, well spoken, a true English accent and a very clear voice. The narrator acts as a voice over and is an example of non-diagetic sound. The documentaries use a narrator to tell the story and explain what is happening in a scene. ...read more.

The interviews gratify the audience because if they hear and educated person use a theory then they will start to understand and accept it. The interviews also relate people to them when they talk about there experiences or their point of view and people feel they know what they have been through or agree with them and take sides, the interview is another factor the documentary maker can use which can work different ways. The interview can completely back up an argument or oppose it. In the Blue Planet the interview is used to find out about the peoples past experiences and how the machinery works and how they filmed it. In the Burkitsville Seven the main use of the interviews are to find out the peoples differences of opinions about different people. All of the programs include an interview with an educated person relative to the theme. The Blue Planet has parts of the crew interviewed; the Burkitsville Seven has psychologists opinions about the culprits mental state, the Pirate documentary has actors that play pirates and researches and the Vanished documentary has interviews with former heads of the apartments and air traffic controllers. It is not only how the interview is structured that is important, it is how it is filmed as well. All of the documentaries use editing in some places to make the screen shot perfect. One editing technique is ...read more.