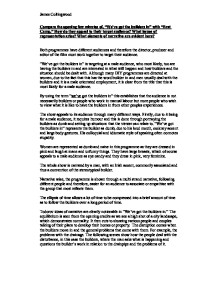 Compare the opening few minutes of, &quot;We've got the builders in&quot; with &quot;Brat Camp.&quot; How do they appeal to their target audience? What issues of representation arise? What elements of narrative are evident here?

Compare the opening few minutes of, "We've got the builders in" with "Brat Camp." How do they appeal to their target audience? What issues of representation arise? What elements of narrative are evident here? Both programmes have different audiences and therefore the director, producer and editor of the film must work together to target their audience. "We've got the builders in" is targeting at a male audience, who most likely, too are having the builders in and are interested in what will happen and how builders and the situation should be dealt with. Although many DIY programmes are directed at women, due to the fact that this has the word builder in and men usually deal with the builders and it is a male orientated employment, it is clear from the title that this is most likely for a male audience. By using the term "we've got the builders in" this establishes that the audience is not necessarily builders or people who work in manual labour but more people who wish to view what it is like to have the builders in from other peoples experiences. ...read more.

"Brat Camp" establishes its audience from the outset, firstly as it is on Channel 4, commonly associated with defiant and irregular TV and due to the start of the programme announcing that this show will contain "strong language," which suggests that this programme is going to be rebellious, bold and dangerous, exactly what the audience wants. It appeals to the audience of teenagers, as they are able to associate with the characters involved. The montage of the teenagers as sweet, innocent children appeals to parents as they can also relate to the parents of the children who have watched their children gradually separate away from them. This is demonstrated when the child pleads for forgiveness, which is emotional blackmail, something parents can relate to and thus empathise with. To show this change from innocent child to angry, rebellious teenager also aids the narrative as it gives firstly a sense of time and to show the disruption, in the example of "Brat Camp" the change in their personality and behaviour which is to be straightened out. ...read more.

It is situated in the desert, all the elders wear cowboy hats, they sit around campfires, and high noon. This makes the whole event a lot more interesting, rather than the camp being in a building or city and makes it more appealing to the audience. The head elder, Wayne Stimpson, is an ex - cop, and the conventions of this can be seen in him. He has a beard and he is a hardliner, coming out with lines such as "I hate being lied to." The narrative is like that of "We've got the builders in" as in some respect it is divided into a multi strand narrative as we follow different people in the same situation. In both programmes, types of people are manipulated by the camera and director as to appeal more to the audience. In "Brat Camp", the camera focuses more on the teenager who does wrong rather than the one that is learning to be good. This is evident in "We've got the builders in" when the camera only shows the woman when they say something dumb, when the builder does or says something stupid or when a disaster happens. ?? ?? ?? ?? James Collingwood ...read more.