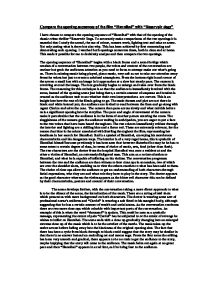 Compare the opening sequences of the film "Hannibal" with "Reservoir dogs" I have chosen to compare the opening sequence of "Hannibal" with that of the opening of the classic crime thriller "Reservoir Dogs. To accurately make comparisons of the two openings it is essential that I study the sound, the use of colour, camera work, lighting text and mise en scene. Not only stating what is there but also why. This has been achieved by first connotating and dennotating each opening. I watched both openings numerous times, both in class and at home. This made it possible for me to decisively analyse and then compare the two openings. The opening sequence of "Hannibal" begins with a black frame and a sound bridge which consists of a conversation between two people, the voices and content of the conversation are unclear but grab the audiences attention as you need to focus to attempt make out what's going on. There is calming music being played, piano music, very soft as not to take our attention away from the voices but just to create a subdued atmosphere. From the bottom right hand corner of the screen a small box with an image in it approaches at a slow but steady pace. The camera is revolving around the image. The box gradually begins to enlarge and takes over from the black frame. ...read more.

The shot is so sudden that the audience only just have enough time to be taken aback let alone comprehend the significance, the fact that Hannibal later eats a brain. There use of pigeons are a link to the "silence of the lambs" when Hannibal describes Clarice as a pigeon and comes in handy when Hannibal's face is displayed amongst the pigeons for a few seconds. This technique of suspending time is a method used twice in this scene, the other being when the camera focuses briefly on a man who's appearance is much similar to that of Hannibal, but we are left unsure whether it is him or not. Either way we are again reintroduced to Hannibal as a physical character rather than just a theme. There are many images of flesh, a representation of cannibalism which is a key theme associated with "Hannibal". The shot of the pigs links in with the events later in the film, when the hungry pigs are unleashed to destroy Hannibal. This theme has been carried on from the Hannibal trilogy. Police officers are also used signify the factor of crime and deviance used by both Hannibal and fellow FBI agents of Clarice. The opening scene of "Reservoir Dogs" has a duration of 7 and half minutes which is exceedingly long for an opening. For a good 6 minutes neither the setting, camera angle nor characters change within the first scene. ...read more.

The appearances of the characters are key to both stories. In Hannibal Cardels appearance is the instigator of what shall happen in terms of the revenge in which he hopes for and so nearly gets. In RD their appearance is to make the audience aware that they are violent gangsters prepared to do a "job". There is a large amount of mise en scene which the audience are witness to. In Hannibal we see the mask and the colours blue and red are of great importance. In RD it is their costumes and mannerisms that play a significant role in helping the audience establish who they are, and that is gangsters. As both films cut to the second scene of their openings, this is where the major comparisons begin. Hannibal uses a vast range of quick relevant images. With the camera work coming in the form of a security camera, and with security or the lack of it from Hannibal being a key theme. In RD the pace from the first scene continues and we are just shown some more characteristics of the gangsters. Camera work is more of an issue in Hannibal, with a diverse range of movement from the panning round in the conversation to the quick shots in Italy, RD concentrates more on the simplicity of one camera constantly circling round as to capture the atmosphere amongst the breakfast morning meeting. By Joe Williams ...read more.