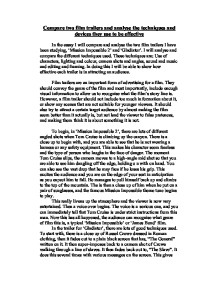 Compare two film trailers and analyse the techniques and devices they use to be effective In the essay I will compare and analyse the two film trailers I have been studying, 'Mission Impossible 2' and 'Gladiator'. I will analyse and compare the different techniques used. These techniques are; Use of characters, lighting and colour, camera shots and angles, sound and music and editing and framing. In doing this I will be able to show how effective each trailer is in attracting an audience. Film trailers are an important form of advertising for a film. They should convey the genre of the film and most importantly, include enough visual information to allow us to recognise what the film's story line is. However, a film trailer should not include too much information about it, or show any scenes that are not suitable for younger viewers. It should also try to attract a certain target audience by almost making the film seem better than it actually is, but not lead the viewer to false pretences, and making them think it is about something it is not. To begin, in 'Mission Impossible 2', there are lots of different angled shots when Tom Cruise is climbing up the canyon. There is a close up to begin with, and you are able to see that he is not wearing a harness or any safety equipment. This makes his character seem fearless and the type of person who laughs in the face of danger. ...read more.

These types of manufactured sounds are all typical of 'Mission Impossible', and audiences familiar with the television series will be reminded of it, and if they enjoyed that, will enjoy the film. On the other hand, in 'Gladiator', the use of sound is much different. At the beginning of the trailer there is light, tension building drumming. This builds up and finally, they cut into the action scenes and the music softens to gentle and deep-rooted music. The main sound effects are swords being drawn, crowd cheering and horses running. This gives the audience the impression that the film will have a serious tone to it and be quite tense. The voice over in 'Mission Impossible 2' is very effective. It begins at just the right time, and the voice itself sounds faintly computerised. This is good because it is a pre-recorded message. It creates an effect of seriousness and this serious tone is elaborated when the voice over man uses emotive words such as 'mission', and then says, "This message will destruct in five seconds'. The effect of this on the audience is that they can immediately identify the genre of the film, as most 'Mission Impossible' type films contain missions and serious voices in the voice-overs. Yet, 'Gladiator' does not use this technique. The only sort of voice over it has, is Russel Crowe's deep and rugged voice, when he is talking about revenge. This also gives the film a serious tone. ...read more.

The fact that Tom Cruise's character is on a remote canyon shows that he is a traveller and has been to a lot of different places in his time. This impacts on the audience because they would question why he was in that sort of place. The emotive language used in the trailer is used by the voice over person. He uses words such as 'mission' and 'agent'. This immediately lets the audience know that Tom Cruise's character is an important secret agent with an important task or set of tasks to complete. 'Gladiator' is set in ancient Roman times and you can recognise immediately by the way the actors are dressed and by the fact that the colours used are all dull. Russel Crowe himself speaks the emotive language used. He says that one day he will get his revenge. This intrigues the audience as they want to know what he wants revenge for. After al of my analysing, I have decided that u prefer the 'Mission Impossible 2' trailer. It is a lot more exciting and I think that it advertises the film a lot better than the 'Gladiator' trailer. It makes the film look more action-packed and enthralling. The action scenes are more convincing then 'Gladiator's' and would attract a wider audience due to al of the different types of clips featured in it. If I was to say which film looked better having just seen the trailers for each, I would definitely say 'Mission Impossible 2'. I have been able to analyse and compare the two film trailers and decide which one I think is more effective and advertises the film best. ...read more.