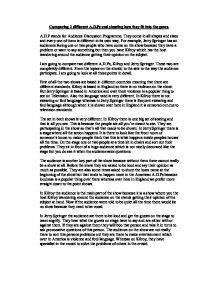 Comparing 2 different A.D.Ps and showing how they fit into the genre.

Comparing 2 different A.D.Ps and showing how they fit into the genre A.D.P stands for Audience Discussion Programme. They come in all shapes and sizes and every one of them is different in its own way. For example, Jerry Springer has an audiences facing one or two people who have come on the show because they have a problem or want to say something but then you have Kilroy which has the host wandering around the audience getting their opinion on the subject. I am going to compare two different A.D.Ps, Kilroy and Jerry Springer. These two are completely different. From the topics on the shows, to the sets to the way the audience participate. I am going to look at all these points in detail. First of all the two shows are based in different countries meaning that there are different standards. Kilroy is based in England so there is no violence on the show. But Jerry Springer is based in America and over there violence is a popular thing to see on Television. ...read more.

Now if the audience were told to be quiet all the time there would be no show because they need to be vocal. In Jerry Springer the audience are there to be loud and get the guests on the stage to react angrily. They hear what the guests on stage have to say and are either with or against them. If they are against them they will boo that person and take it in turns to ask provocative questions of this person. The audience on the show are not really there to sort this persons problems out they are there to make entertainment which over in America is violence and foul language. Whereas on Kilroy, they have specialist in the crowd to solve the problems of others in the crowd. The guests on the shows are different, because in Kilroy they don't really have guests. The only type of guest which they really have is specialists e.g. Doctors and Psychologists. But they sit with the audience so until they are introduced you just see them as another member of the audience. ...read more.

He also wears a suit so again he looks important and he also cracks the odd joke. The topics raised are also quite different. In the episodes I watched Kilroy was about getting fit for the New Year and Jerry Springer was about a man who was living in a box. These to subjects are completely different to each other. You can see that in Kilroy the things they debate are about you and how you can help yourself. You can actually benefit from watching it. Whereas in Jerry Springer you can see that not many people live in their back garden in a box so not many people can relate to it meaning that people will watch it mainly as entertainment than a programme that can help them. So both shows are called A.D.Ps but are completely different to each other. Kilroy is called an A.D.P because it is a programme where the audience discuses various subjects and solve peoples problems. Jerry Springer is an A.D.P because although it is not based around the audience it still has the audience take part, whether it's asking questions or just shouting out his name at the beginning of the show. Without the audience both these shows would not work. ...read more.