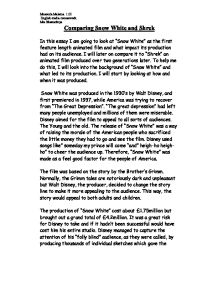 Comparing Snow White and Shrek In this essay I am going to look at "Snow White" as the first feature length animated film and what impact its production had on its audience. I will later on compare it to "Shrek" an animated film produced over two generations later. To help me do this, I will look into the background of "Snow White" and what led to its production. I will start by looking at how and when it was produced. Snow White was produced in the 1930's by Walt Disney, and first premiered in 1937, while America was trying to recover from "The Great Depression". "The great depression" had left many people unemployed and millions of them were miserable. Disney aimed for the film to appeal to all sorts of audiences. The Young and the old. The release of "Snow White" was a way of raising the morale of the American people who sacrificed the little money they had to go and see the film. Disney used songs like" someday my prince will come "and" heigh-ho heigh-ho" to cheer the audience up. Therefore, "Snow White" was made as a feel good factor for the people of America. The film was based on the story by the Brother's Grimm. Normally, the Grimm tales are notoriously dark and unpleasant but Walt Disney, the producer, decided to change the story line to make it more appealing to the audience. ...read more.

This was a deliberate way to make her seem evil and let the audience know she is an enemy towards Snow White. The mirror, who's voice seems to echo from somewhere within, hell perhaps, seems to feel sorry for Snow White when it mentions her name: "Alas my fair lady". The Queen however disrespects the mirror because he/she is a slave. Her voice is loud and sharp, which makes her, appear bossy. She moves swiftly, superstitiously with long strides, which make her look dominant and overbearing. When the mirror mentions Snow White, her cat shaped eyes narrow and she hoarsely repeats it to show a malicious intent toward her. It is at this point that a dissolved shot introduces us to Snow White. "Shrek" on the other hand has a very different opening. The audience is shown a book with calligraphy writing, which is narrated sarcastically by Shrek himself. After six pages, a voice shouts "Like its ever gonna happen", at this point, a page is torn and opening shot comes. A hut is shown and Shrek continues, "What a lot of ****". Just the opening scene shows it is a comedy aimed for everyone. Like the Queen in "Snow White", Shrek is shown at a low angle shot to make him look more menacing. ...read more.

He camera tilts upwards to reveal the Queen with an evil expression on her face. Mise-en-scene, all the animals like Snow White and play with her and it shows that she is a real princess. She is gentle, shy and modest, unlike Princess Fiona in "Shrek". Princess Fiona in Shrek reacted oppositely when attacked. She hits and kicks Shrek the first time they meet. She also kills a bird at one point. Snow White is pretty too unlike Princess Fiona who turns into an Ogre. This also shows the difference between the two films. We can see the two films have different characters and certainly different heroes. While both are feel good films and are targeted for all audiences, they show different humour and reflect the different times of their production. This can be seen in the language the mirror in "Snow White" uses which is very out dated and humour used by the donkey in "Shrek". We see that the music taste has changed as well since the production of "Snow White", but also that technology has improved since then. For the production of "Shrek", latest technology was used to create a lot of extras, which include life-like and realistic appearances like facial expressions, background, clothing etc. In the making of "Snow White" however, most of the details had to be sketched out because the technology had not advanced as much. Musonda Malama 11H English media coursework. Mrs Bhattachrya ...read more.