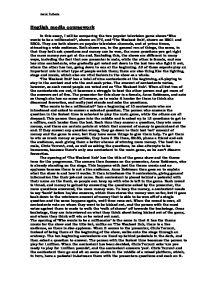 Comparing the two popular television game shows 'Who wants to be a millionaire?', shown on ITV, and 'The Weakest link', shown on BBC1 and BBC2. They

English media coursework In this essay, I will be comparing the two popular television game shows 'Who wants to be a millionaire?', shown on ITV, and 'The Weakest link', shown on BBC1 and BBC2. They are both shown on popular television channels, and at prime times, attracting a wide audience. Both shows are, in the general run of things, the same, in that they both ask questions and money can be won, the more questions you get right the more money you get at the end. Excluding this, the shows are different in many ways, including the fact that one presenter is male, while the other is female, and one has nine contestants, who gradually get voted out down to the last two who fight it out, where the other has ten, going down to one at the beginning. All of these aspects play an important role in what type of people watch them; there are also thing like the lighting, stage and music, which also are vital factors in the show as a whole. 'The Weakest link' has a total of nine contestants at the beginning, all-playing to stay in the contest and win the end cash prize. The amount of contestants varies, however, as each round people are voted out as 'The Weakest link'. ...read more.

During the show she acts as if she would rather be somewhere else, instead of hosting the show. It seems she is being a nasty person, and bad sportsman, but really she does do it to all the people in the show, not just one or two, so it isn't bullying in the proper way, but rather as a front so people don't assume the show is fixed or anything. The presenter on 'Who wants to be a millionaire?' is a male named Chris Tarrant, and is also well known for another show he presents on Channel four, called 'Tarrant on TV'. He, also, dresses in formal clothes for the show. He is well mannered when hosting the programme, and it doesn't matter whether the person has won a million or a hundred, he will be polite to them. He asks things about the players, and comes across as a polite, friendly person. He gives a lot of encouragement to the participant, almost trying to make them win the million pounds. He also gives the contestant a chance to change their answer before they say if it's right or wrong. He also teases players with money, even getting out a check and waving it round in front of them, then telling them 'but we don't want to give you that' and tries to get them to win more. ...read more.

The shows don't show a difficulty level in questions, although 'Who wants to be a millionaire?' seems to get harder the more money the question is worth, but really it is down to how much common knowledge you have. 'The Weakest link' makes it harder for the contestants to win money, because they have to answer the question faster. Neither of the shows is run at the same time, to avoid conflict between the two. The ending of both shows is also different, 'The Weakest link' has a winner who gets the money, and a runner up who gets nothing, and you see both walk off, and then they both give an interview account on how they think it went and how they feel about winning/losing. 'Who wants to be a millionaire' finishes when time has run out, or there's no one left to go and answer questions, but it could end with a person not having finished answering, they then have to come back the next episode and finish. If someone wins a million pounds, balloons and tapers fall down from the ceiling making it a big celebration. When the shows finish, they have the end credits saying who has been on the show and who makes the show happen. Both shows have many merchandise available to buy, with quiz books, computer games and board games, these can all be purchased by fans of the show, or someone just out for a game to play. Aaron Roberts ...read more.