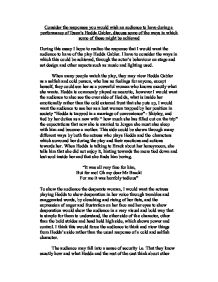 Consider the responses you would wish an audience to have during a performance of Ibsen's Hedda Gabler, discuss some of the ways in which some of these might be achieved.

Consider the responses you would wish an audience to have during a performance of Ibsen's Hedda Gabler, discuss some of the ways in which some of these might be achieved During this essay I hope to realise the response that I would want the audience to have of the play Hedda Gabler. I have to consider the ways in which this could be achieved, through the actor's behaviour on stage and set design and other aspects such as music and lighting used. When many people watch the play, they may view Hedda Gabler as a selfish and cold person, who has no feelings for anyone, except herself, they could see her as a powerful woman who knows exactly what she wants. Hedda is commonly played as neurotic, however I would want the audience to also see the over side of Hedda, what is inside her emotionally rather than the cold external front that she puts up, I would want the audience to see her as a lost women trapped by her position in society "Hedda is trapped in a marriage of convenience"- Shipley, and tied by her duties as a ...read more.

In order to achieve this I would want the spatial relationships and body language that they have in the beginning to be lose and fairly relaxed, to show a friendship in a high social class, but as the play continues I would want the audience to see the closeness of their companionship through occasional reaching to each other to touch and embraces. Hedda's death in the final scene will have a large impact on how the audience views the play. She finally gets the beautiful ending that she has been romanticizing over, she takes her own life, shooting herself in the temple as she lies stretched out over the sofa, beautifully. This sudden and abrupt ending to Ibsen's famous play, will dramatically and suddenly change the way the audience were feeling towards the social games that she was playing, I would hope that the sudden suicide of Hedda, would give the audience a sense of shock but also of placement, they realise the extent of Hedda's tortured soul and what it lead her to do, to take her own life and the life rapidly growing inside of her, her child. ...read more.

I would also want the audience to consider how they view Mrs Elvsted more carefully. Many audiences may see her as the honest and good stable woman in the play that she was not as "bad" as Hedda, but we tend to forget that, she has been a mistress, and then got married to this man for financial reasons, she then also had another affair with Lovborg and left her husband without permission to follow Lovborg. The audience never seems to pick up that Mrs Elvsted is just as "bad" in mannerisms as Hedda is. It is shown by 3 of the dominant female characters (Hedda, Mrs Elvsted and Mademoiselle Diana) that they must flaunt their sexuality to survive in the male dominated society. So to accentuate Mrs Elvsted's character and not to let the audience view her as a side of the stage character, who does not play as much of a part as Hedda, I would encourage the actress, to play her as a more sexually driven character who also uses her charms, I would also have her speak in a direct tone, but still lower than Hedda, as she is meant to fear her. ...read more.