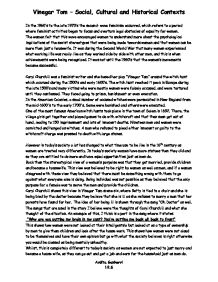 In the 1960's to the late 1970's the second- wave feminism occurred, which refers to a period where feminist activities began to focus and overturn legal obstacles of equality for women. The women felt that this wave encouraged women to understand more about the psychological implications of the sexist stereotypes that were being made towards women and that women can be more then just a housewife. It was during the Second World War that many women experienced what working life was really like as they worked side by side with other men, and this is when achievements were being recognized. It was not until the 1960's that the women's movements became successful. Caryl Churchill was a feminist writer and she based her play "Vinegar Tom" around the witch hunt which accrued during the 1500's and early 1600's. The witch hunt reached it peak in Europe during the late 1500's and many victims who were mostly women were falsely accused, and were tortured until they confessed. They faced going to prison, banishment or even execution. In the American Colonies, a small number of accused witches were persecuted in New England from the mid-1600's to the early 1700's. ...read more.

You're putting me back all back to front" This shows how women were not looked at their intelligentsia but looked at as a type of ownership by men to give them children and look after the house work. This shows how women were not aloud to be themselves and have their own opinion but go with what the society believes is right otherwise you would be classed as being mentally unhealthy. Whilst, this is completely different to today's society as women are not expected to just marry and become a house wife, as they can go out and get a job and earn for the household just as men do. Also they marry who they want and when they want and are not expected to marry as soon as you get to a certain age just so that you can do what a woman is stereotypically believe to be doing. Caryl Churchill has an issue through out each scene in Vinegar Tom and it shows different problems that occurred to women such as verbal abuse and being used for sex. It also shows the views of how after you get old you are seen as useless and not wanted. And example of this would be off the character Joan. ...read more.

In scene ten, Jack and Margery use Joan as a scape-goat to their problems. "Margery: it is, isn't it, Jack? Mother Noakes, isn't it? Jack: It was Mother Nokes in that glass." This shows how they try and use Joan as the main cause of their problem which later on results to her being hanged, as she is accused of being a witch. They think that by blaming her and then avoiding her, the problem will go away and that they will not get blamed about anything. This is similar to today's society as when people come to a problem that they get caught in the middle of they try to find another course for it to try and take them blame of them and shift it onto someone else so that they do not have to deal with it. For example if two children are playing football and one of them kicks it hard and breaks a window by accident, because they know that they will get in trouble by their parents as well as the people who's windows they just broke, they will try to shift the blame on their friend as well so that they can avoid getting in lots of trouble. ?? ?? ?? ?? Vinegar Tom - Social, Cultural and Historical Contexts Ardita Gaxherri 12.6 ...read more.