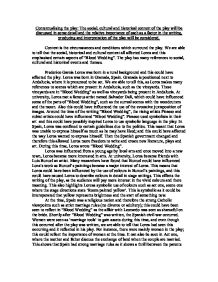 Contextualising the play: The social, cultural and historical context of the play will be discussed in some detail and the relative importance of each as a factor in the writing, producing and interpretation of the play will be considered. Context is the circumstances and conditions which surround the play. We are able to tell that the social, historical and cultural context all affected Lorca and this emphasised certain aspects of "Blood Wedding". The play has many references to social, cultural and historical events and themes. Frederico Garcia Lorca was born in a rural background and this could have affected the play. Lorca was born in Granada, Spain. Granada is positioned next to Andalucia, where it is presumed to be set. We are able to tell this, as Lorca makes many references to scenes which are present in Andalucia, such as the vineyards. ...read more.

During this time, Lorca wrote "Blood Wedding". Lorca was influenced from a young age by local arts and once moved into a new town, Lorca became more interested in arts. At university, Lorca became friends with Luis Bunuel an artist. Many researchers have found that Bunuel could have influenced Lora's work as Bunuel's paintings became a major interest of Lorca. This means that Lorca could have been influenced by the use of colours in Bunuel's paintings, and this could have caused Lorca to describe colours in detail in stage settings. This effects the writing of the play, as the audience will pay more interest in the vivid colours and there meaning. This also highlights Lorcas symbolic use of colours such as act one, scene one where the stage directions state 'Room painted yellow'. This is symbolic as it could be interoperated that yellow represents brightness and the start of something new. ...read more.

Also in Spain at the time, people were beginning to revolt and in 1936 General Franco, became a new dictator. This could be seen as being reflected in the play as the bride was expected to marry against her will, as her father had chosen her husband for her. Lorca believed that society was very important, and he believed that society was the reason why people do not do as they wish but do as they should, and this could be reflected in how the bride doesn't want to marry but is forced. The bride is expected to marry someone who has good financial prospects, rather than someone who she actually loves. From research into Spanish traditions it was assumed that brides would marry someone for their finical prospects or land ownership. Lorca was born in a village which was in the countryside, and this could be seen to be reflected in "Blood Wedding" as there are many references to the countryside. ...read more.