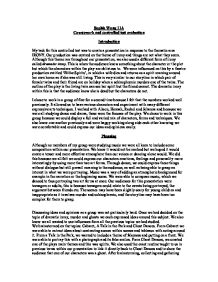 Create a presentation in response to the thematic area IRONY.

Sophie Wong 11A Coursework and controlled test evaluation Introduction My task for this controlled test was to create a presentation in response to the thematic area IRONY. Our production was centred on the theme of irony and things are not what they seem. Although this theme ran throughout our presentation, we also used a different form of irony called dramatic irony. This is when the audience know something about the character or the plot but which the characters within the play are oblivious to. We were influenced on this by a theatre production entitled 'Blithe Spirits', in which a wife dies and returns as a spirit roaming around her own home as if she was still living. This is very similar to our storyline in which pair of female twins and their friend are on holiday when a schizophrenic murders one of the twins. The outline of the play is the living twin can see her spirit but the friend cannot. The dramatic irony within this is that the audience know she is dead but the characters do not. I chose to work in a group of five for a second time because I felt that the numbers worked well previously. It allowed us to have various characters and experiment with many different expressive arts techniques. I worked with Alison, Hannah, Rachel and Johanna and because we were all studying dance and drama, these were the focuses of the play. We chose to work in this group because we could display a full and varied mix of characters, forms and techniques. We also knew one another previously and were happy working along side each other knowing we were comfortable and could express our ideas and opinions easily. Planning Although no members of my group were studying music we were all keen to include some composition within our presentation. We knew it would not be marked but we hoped it would create a tenser and more effective atmosphere than our voices or dancing alone would. ...read more.

Dance: The effects we wanted to achieve through dance were the actual feelings, status and links between characters, as this cannot always be shown effectively through drama. We wanted to show the dynamics of the characters personalities and the way they felt about each other, which again was not mentioned anywhere within the drama. We also wanted the dance to look interesting and original. We wanted to use a variety of different techniques and forms to bring variation, excitement and meanings to the dance. As a whole what we couldn't express easily in drama, we wanted to do successfully through dance. The devices and techniques we used to create this effect were: Solo - this was used in the first dance; I left the frozen photo tableau and went to mime next to the narrators. We did this to show how I was separated from the group, as I was not involved in the story yet. This helped the audience realize that I was not part of what was happening. I moved my hand and arm around in a circular motion a few inches from the ground; I used a different level from the narrator to show I wasn't part of who she was either. This symbolized the water along the beach and helped to reveal my surroundings. Duet - There were two uses of this within our presentation. The first was when Rachel and Hannah first walked past each other and created a tableau the moment their bodies touched. The narrator began as did the music and soon after their dance began. This helped further the story greatly as we used canon to emphasize the difference between them and that one was dead and one was living. They did things at different times to show they were not in synchronization. There was also a duet between Johanna and Alison. About half way through our presentation. ...read more.

The dance with Alison and Johanna showed the split personalities more successfully than I think drama could have done on its own. We carried on this theme, when they two personalities swapped places and one became more dominant in the drama, I think this idea was one of the most creative of the piece. The dance between Hannah, Rachel and myself communicated the situation of being so close yet so far apart. Breaking up the drama with the dance is also more visually stimulating; it also developed the story and gave the audience a message, which I think would be very hard to accomplish in drama. Conclusion The performance itself had a number of strengths. The main one being the use of integration of dance and drama; we all felt this was done very successfully. This improved the communication of the story and helped the audience to understand the characters emotions, relationships, status and personalities. The research was helpful and well planned and the development improved many of the scenes. The performance went well, although it had been better during rehearsals, where there had been more of a tense and creepy atmosphere. If we had more time to rehearse we could have improved a lot of the scenes. Parts of narration could have been learnt off by heart and the general timing made perfect. As for the dances, more rehearsal time could have lead to exact unison and more spatial awareness, as we weren't familiar with the stage. This was because we had practiced the dances in a different place. I also think although the dance between Alison and Johanna was excellent, it should have been in a different place because it interrupted the tension in the scene and the overall aim of it. Overall I think we managed to create a genuinely frightening mood, integrate drama and dance very well and leave the audience with a sense of fear, anticipation and on the whole with a lingering thought of what happened next. ...read more.