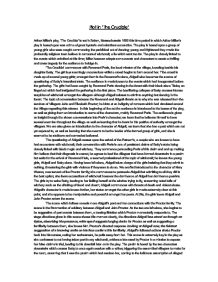 Plot in 'The Crucible' Arthur Miller's play, 'The Crucible' is set in Salem, Massachusetts 1692 this time period in which Arthur Miller's play is based upon was a time of great hysteria and relentless accusation. The play is based upon a group of young girls who were caught commencing the prohibited act of dancing; young and frightened they made the profoundly religious town believe in rumours of witchcraft; a lie which went too far. The play is closely linked to the events which unfolded at this time; Miller however adapts some events and characters to create a thrilling and tense tragedy for the audience to indulge in. 'The Crucible' commences with Reverend Paris, the local minster of the village, kneeling beside his daughter Betty. The girl lays seemingly unconscious whilst a crowd begins to form around her. Tthe crowd is made up of several young girls; amongst them is the Reverend's niece, Abigail who becomes the source of questioning of Betty's insentient state. The audience is made known to the events which had inaugurated before the gathering. The girls had been caught by Reverend Paris dancing in the forest with their black slave Tituba, an illegal act which had instigated the gathering in the first place. ...read more.

I hope you'll leave some of it in Salem.' Paris asks Reverend Hale to examine Betty; whilst doing so he is attacked with questions of witchcraft leaving Paris to try and explain the situation. Hypercritically he hushes the crowd wanting answers before he makes an assumption. Hale holds Betty attempting to get answers out of her; failing to do so he directs his questions at Abigail in hopes of further information. Under the pressure of such inquisitive questioning, Abigail lays the blame of events on Tituba, their black slave. Tituba feebly tries to defend herself, claiming her love for 'Me Betty'. The interrogation proves too much for her and she ends up admitting to having associations with the Devil in hopes of sparing herself from being hung. She makes up a tale of the Devil wanting Paris dead and conjures up a convincing tale of her encounter; the tale she invents unfolds with several accusations of having seen several villagers with the devil too- a starting point of all mass accusation in the play. Abigail cleverly seeing a way out begins to shout out several names herself causing the other girls to follow lead and shift the blame from themselves too; hysteria forms. ...read more.

Danforth asks Elizabeth to talk to her husband and ask him to confess; John, although conflicted agrees to do so. However, being a man of honour Proctor refuses to name any of the accused; the court once again commences. Nonetheless, during the hearing Parris, Hale and Danforth over step the mark, insisting that his confession become public and is to be written down and nailed to the church door as proof. Begrudgingly Proctor signs but then tears the document up whilst arguing that whether he writes his confession down or merely speaks it, it is still a confession. Danforth will not back down to Proctor, insisting he need the document to be signed, Proctor too does not back down shouting that he needs his name. The argument reaches a plateau where neither man stands down; knowing he will be sentenced to death, Proctor, out of pride, takes back is confession. He walks to the gallows with the others knowing his fate, meeting cries of incredulity. The conclusion of the play takes place with Hale's last desperate plea to Elizabeth, asking her to insist that Proctor sign the confession, the play ends with Elizabeth's cry 'He have his goodness now, God forbid I take it from him!'. ...read more.