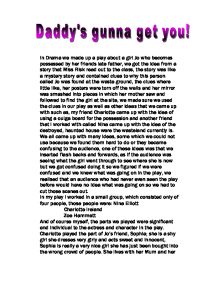 Daddy's gunna get you!

In Drama we made up a play about a girl Jo who becomes possessed by her friends late father, we got the idea from a story that Miss Risk read out to the class, the story was like a mystery story and contained clues to why this person called Jo was found at the waste ground, the clues where little like, her posters were torn off the walls and her mirror was smashed into pieces in which her mother saw and followed to find the girl at the site, we made sure we used the clues in our play as well as other ideas that we came up with such as, my friend Charlotte came up with the idea of using a ouiga board for the possession and another friend that I worked with called Nina came up with the idea of the destroyed, haunted house were the wasteland currently is. We all came up with many ideas, some which we could not use because we found them hard to do or they became confusing to the audience, one of these ideas was that we inserted flash backs and forwards, as if the audience was seeing what the girl went through to see where she is now but we got confused doing it so we figured if we were confused and we knew what was going on in the play, we realised that an audience who had never even seen the play before would have no idea what was going on so we had to cut those scenes out. ...read more.

I know how very talented they are at acting I knew that whatever the part maybe that they would be capable of reaching out and helping me construct the play from every tiniest detail of reactions and facial expressions, the people I choose to work with encouraged me and each other when we need help, we helped with constructive criticism and by being not only actresses but directors as well. The play was about a young girl named Jo who was found at the wasteland near her home, we made up a play showing how she got to that stage and what happened afterwards, In the first scene Jo's friend Sophia is arguing with her mother about the whereabouts of her real father, when the scene changes to school we see the first appearance of Jo and her friend Lavender, Lavender is reading a book and Jo is looking impatient, they talk about the whereabouts of Sophia until she turns up at which the subject is changed to ouiga boards and they all end up agreeing to meet up at 6 at Jo's house. Then comes another scene between Sophia and her mother, her mother is about to tell her something but then her Step-Dad walks in the house and her mother stops. The scene changes to Jo's room where they attempt the ouiga board only to conjure up a spirit which possess Jo to tear all her posters down smash her mirror and write on the wall in her own blood she then stumbles to the waste ground where the taunting screams of ghosts make her faint. ...read more.

the message to me that was being passed onto the audience was that things are not always easy and that people need to work things out and that playing with ouiga boards is not a game but is a serious business that can have very serious effects. I think my character displayed an attitude of soloism amongst her friends I think the audience realised that she gained the respect and that all the events seemed to revolve around her house and that it was her friends that she dragged into it and that if it wasn't for her none of the events would have happened. Overall I was happy with the play that we performed, I felt my character role was important to the piece and I felt that I played this role well, my friends in my group encouraged me when I needed it and gave me constructive criticism when I needed it, I felt like I have learnt a lot about how bad life can get from this play, I have learnt that even though peoples lives might look cheerful inside they might be hurting more then anyone else. I have also learnt more dramatic skills and feel that these will help me in the future for when I perform other roles. I have learnt that in a play the characters mood at the beginning is how the audience interprets them through out the entire play. I am really happy with the play e have produced and hope that my future performances will be just as good or better. ...read more.