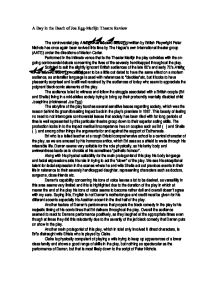 day in the death of joe egg

A Day in the Death of Joe Egg-Merlijn Theatre Review The controversial play A Day in the Death of Joe Egg, written by British Playwright Peter Nichols has once again been revived this time by The Hague's own international theater group (AATG) under the directions of Marion Carter. Performed in the intimate venue that is the Theater Merlijn the play coincides with the on-going controversial debate concerning the lives of the severely handicapped throughout the play. Scripted to suit the slightly ignorant British audiences of the late 60's and early 70's A Day in the Death of Joe Egg would appear to be a little out dated to have the same effect on a modern audience, as unfamiliar language is used with references to "blackies"etc, but it looks to have pleasantly surprised and is still well received by the audiences of today who seem to appreciate the poignant black comic elements of the play. ...read more.

Darren seems very suitable for the role physically, as his lanky body and awkwardness leads us to chuckle at his sometimes "pathetic humour". Along with his physical suitability for the main protagonist of this play his body language and facial expressions aids his role in trying to act the "clown" of the play. We see his exceptional talent for facial expression in the scenes where he and wife Sheila act out previous events in their life in reference to their severely handicapped daughter, representing characters such as doctors, surgeons, close friends etc. Darren's capability concerning his tone of voice leaves a lot to be desired, as versatility in this area seems very limited and this is highlighted due to the duration of the play in which at nearer the end of the play his tone of voice seems to become rather dull and overall doesn't agree with my ears. ...read more.

Sheila who Clare is playing is more open in showing her emotions compared to Bri, but despite this still often uses black humor to try and distract herself from her gloomy life. Clare's tone of voice is versatile and this keeps the interest levels in more stagnant scenes alive These hot topics definitely left me along with other members of the audience in a pensive mood after we A unique aspect of the play contrast to other productions I have witnessed is the relationship built up between audience and characters in an attempt for us to feel more connected emotionally to the turmoil and distress being shown on stage. The set superbly recreates a typical 60's looking living room with appropriate furniture and is dressed in an appealing colour scheme that is highlighted through the use of filters and subtle lighting effects. This delicate use of lighting in the play expanded the versatility of the set magnificently along with creating atmosphere and mood appropriately to the play. ...read more.