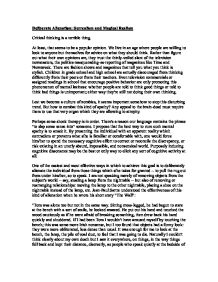 Deliberate Alienation: Surrealism and Magical Realism Critical thinking is a terrible thing. At least, that seems to be a popular opinion. We live in an age where people are willing to look to anyone but themselves for advice on what they should think. Rather than figure out what their own opinions are, they trust the thinly-veiled slant of the television newscasters, the politics-masquerading-as-reporting of magazines like Time and Newsweek. There are fashion shows and magazines that tell you what you think is stylish. Children in grade school and high school are actually discouraged from thinking differently from their peers or from their teachers. Even television commercials or assigned readings in school that encourage positive behavior are only promoting this phenomenon of mental laziness: whether people are told to think good things or told to think bad things is unimportant; either way they're still not doing their own thinking. Lest we become a culture of zombies, it seems important somehow to stop this disturbing trend. But how to combat this kind of apathy? Any appeal to the brain-dead must require them to use that very organ which they are allowing to atrophy. Perhaps some shock therapy is in order. There's a reason our language contains the phrase "to slap some sense into" someone. I propose that the best way to cure such mental apathy is to attack it. By presenting the individual with an apparent reality which contradicts or prevents what s/he is familiar or comfortable with, one would force him/her to spend the necessary cognitive effort to correct or reconcile the discrepancy, or risk existing in an utterly absurd, impossible, and nonsensical world. ...read more.

In the Prologue to Book One of Ficciones, "The Garden of Forking Paths," he mentions quite seriously that one of the book's eight stories "is not entirely innocent of symbolism." (Borges 15) When one considers the fantastic events that transpire in the book, it is difficult to imagine that this comment is not meant to be tongue-in-cheek. But in fact, I believe that it truly is not. Ficciones is a tour de force of magical realism. But Borges chooses to emphasize the term "realism" in his understanding of the genre. To him, reality is already magical enough. He uses sentences like "Late in February, 1939, something happened to him," (Borges 167) as if to say that the mere fact of a thing happening was exciting and fantastic in itself, and needed no adjectival crutch ("something strange happened to him," "something amazing happened to him"). What Borges finds frustrating is that his audience does not share the same mystical view of reality. He needs to show them just how extraordinary their ordinary world is. The collection's first story, "Tl�n, Uqbar, Orbis Tertius," accomplishes this expertly. Borges spends most of the story establishing an elaborate fantasy world whose commonly held philosophical truths are incongruent with our own. "The nations of that planet [Tl�n] are congenitally idealist. Their language, with its derivatives -- religion, literature, and metaphysics -- presupposes idealism. For them, the world is not a concurrence of objects in space, but a heterogeneous series of independent acts. It is serial and temporal, but not spatial. There are no nouns in the hypothetical Ursprache of Tl�n, which is the source of the living language and the dialects; there are impersonal verbs qualified by monosyllabic suffixes or prefixes which have the force of adverbs. ...read more.

But he is unique in being willing to go the extra distance and say that art must be cruel, that it must assault the audience, that they should feel its effects whether they want to or not. Such is the case, for example, with Samuel Beckett's Waiting For Godot. I have spoken with very, very few people who failed to use the word "boring" to describe this play. I once sat through a showing of this play with companions who later said the experience was agonizing. But this is precisely Beckett's objective. The play is meant to be boring and agonizing, because Beckett's intent is to show us how our daily lives are boring and agonizing in just the same way. The irony of Godot is that Vladimir and Estragon have lived this way for years, and may continue to do so for years to come, without ever realizing, or in any case properly addressing, the futility of their plight, of their existence. But were they to come into the theater and watch the play, they would howl with laughter at the characters who were in fact themselves. So should we do the same: we must realize that Vladimir, Estragon, Pozzo, Lucky, and perhaps even the messenger boy, are us. It is we who are up there on stage, making fools of ourselves; we who sit in the audience, making fools of ourselves by laughing at ourselves making fools of ourselves onstage. But surrealist art (of which Godot may not be the best example, anyway) need not be offensive in contrasting perception and reality. Much of the greatest surrealism is, in fact, quite funny. Allow me to reprint, in its entirety, one of my favorite surrealist works. ...read more.